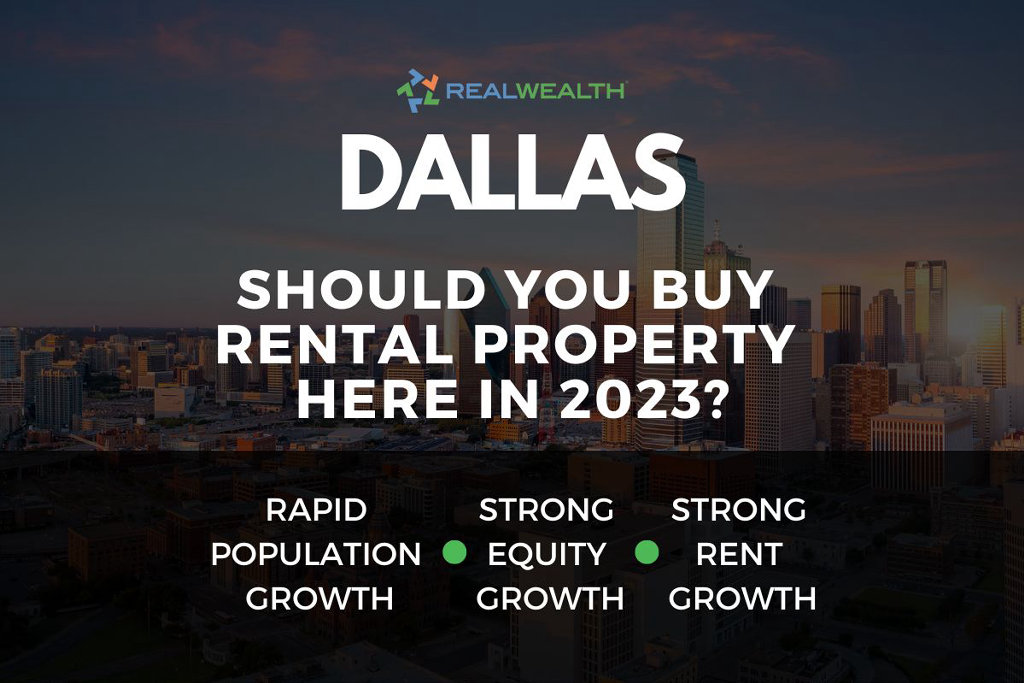 Interested in investing in the Dallas real estate market at the end of 2022 or into 2023? On this page you’ll learn about housing market trends and statistics to help you make that decision.

Dallas is the ninth-largest city in the United States and the third-largest in Texas, with a population of over 7 million residents. The city is home to some of the most famous sports teams in all of North America, including the Dallas Cowboys and the Texas Rangers. It’s also known for its smoked barbecue and authentic Mexican food.

The city itself sits at the center of North Central Texas, 35 miles from Fort Worth, 245 miles from Houston, and 300 miles from the Gulf of Mexico. Its climate is characterized by long winters, short springs and falls, and hot summers with occasional cold snaps.

Dallas began as a marketing center and remains one today—its trade economy is based on wholesale commerce in apparel, gifts, and furniture. The city hosts a large number of trade shows each year at the Dallas Market Center Complex – 150 acres in the northwest sector of the city. The Dallas Market Center Complex houses the World Trade Center, Dallas Trade Mart, Market Hall, Apparel Mart, Menswear Mart and Home Furnishings Mart. 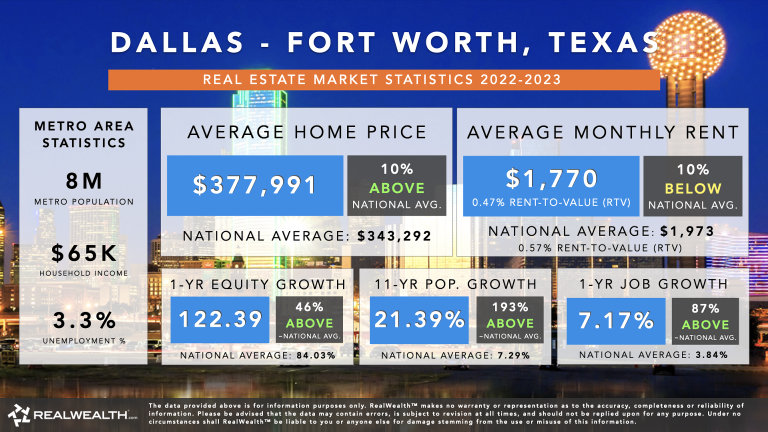 The Dallas-Fort Worth metroplex has had a flurry of economic development wins in the past decade. Over time, DFW’s economy has diversified to resemble that of the broader U.S., with strong sectors including manufacturing, transportation and logistics, construction, professional services and health care.

Despite this diversification, Dallas remains affordable compared to other major U.S. markets. The following section explores the top factors that contribute to Dallas’ status as a strong real estate market, including affordability, job growth, and population growth. Dive into the housing market, population, and employment trends in the tabs above. 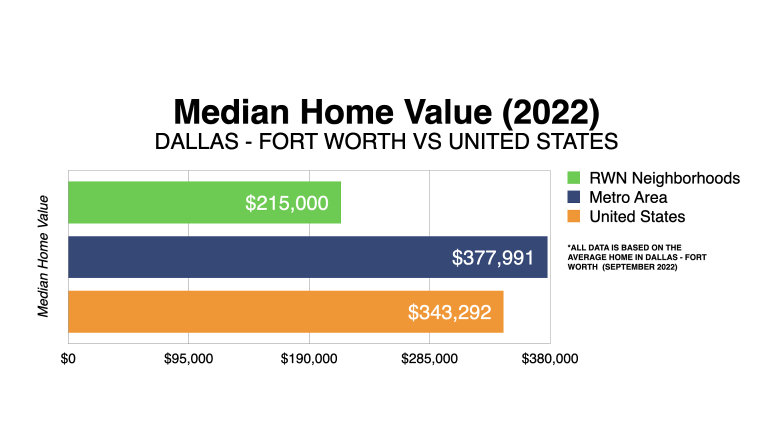 Based on data from RealWealth, the annual price to rent ratio in Dallas is 17.8. When the price to rent ratio is between 15 to 20, it means it’s better to rent than buy for those considering living in the Dallas metro. Since renting is more affordable than buying here for the typical resident, 59% of households in Dallas rent their homes.

For investors, a more important metric is RTV. The average rent-to-value ratio in Dallas is 0.47%. That’s about 18% lower than the US average. When it comes to investing, the higher the RTV, the better. In the past, investors usually strived to get a RTV of 1% or higher based on the 1% rule, but in today’s market deals like these are especially hard to come by. Today, you should strive for an RTV of 0.65% on the low end and 0.75% on the high end.

With an average RTV of 0.5% in the metro area, you might have a hard time locating profitable real estate deals. This is why having connections who know the market well are so important. Today, in the neighborhoods where RealWealth members invest, the average RTV is 0.79%. This is 55% better than the metro area as a whole. 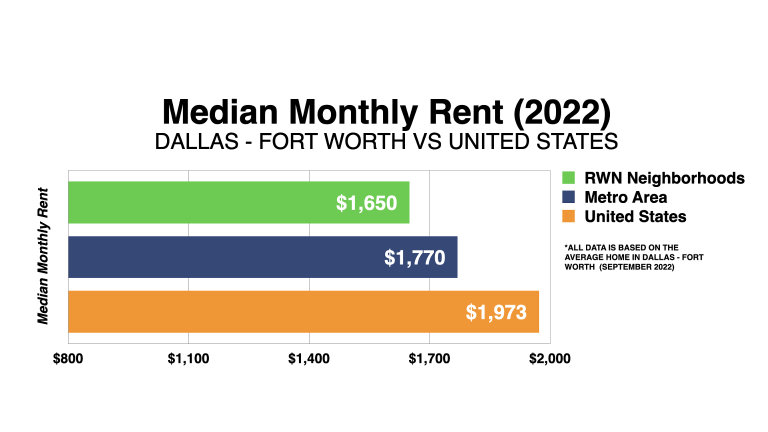 In 2022, the median monthly rent in Dallas was $1,771. This was 10% lower than the national median rent of $1,973. Dallas’ rents have grown more slowly than home prices since 2010. One reason for this is that the multifamily market in Dallas is strong and tens of thousands of new units are added each year. Since 2010, the multifamily market has added over 145,000 new units, and its inventory has grown to more than 25 percent of all housing stock—the most of any US market. 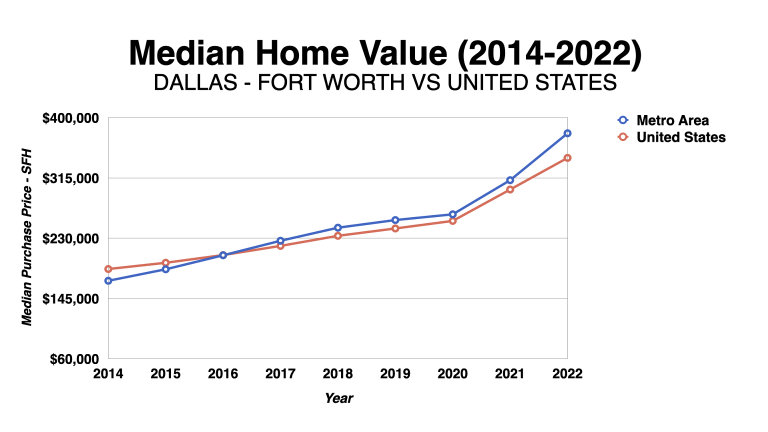 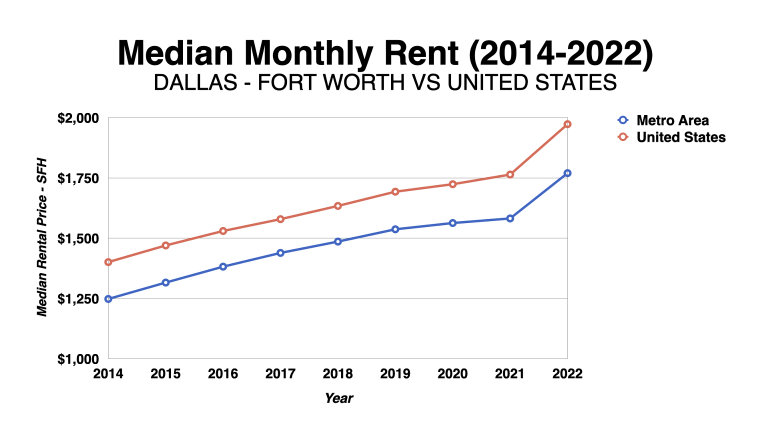 In fact, Dallas’ rent has appreciated by 42% between 2014 and 2022. That is 3% greater than the national average rent price appreciation rate of just under 41%.

However, Dallas’ rent is still 10.25% more affordable than in many other parts of the US, which is one of the reasons it’s such a popular place for renters to call home. 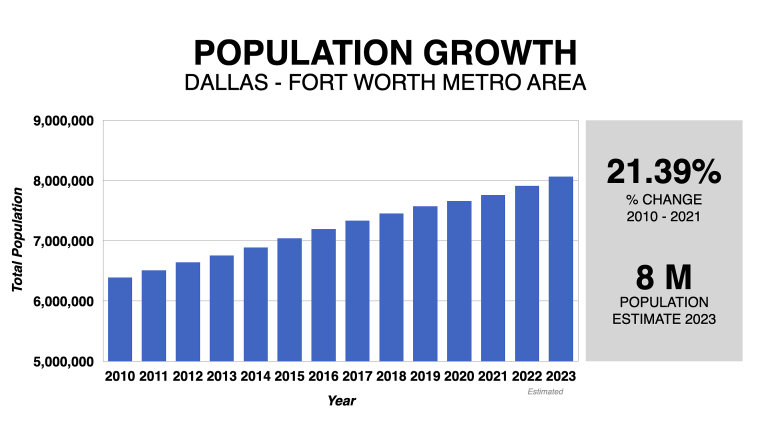 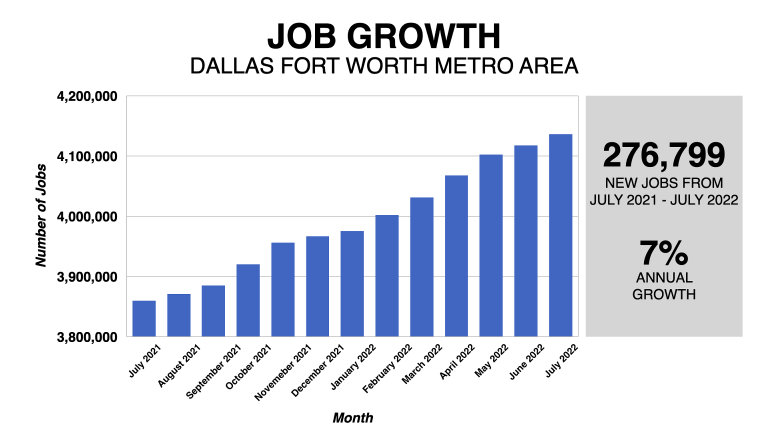 Dallas has seen a lot of growth in its job market over the past year. The Department of Numbers reports that Dallas added 303,300 jobs from May 2021 to May 2022—a whopping 7.99% increase in the number of jobs in Dallas over the course of the year. That’s over 108% higher than the national average of 3.84%.

Reports from the U.S. Bureau of Labor Statistics indicate that over the past year, job growth has been fastest in the leisure and hospitality industry (up 17%), followed by trade, transportation and utilities (up 6%).

In the past seven years, real estate prices have increased 10.64% per year on average in Dallas. This high home appreciation rate is due to low housing supply relative to demand.

According to the MetroTex association of Realtors, inventory increased by 11.2% in July 2022. The current housing supply in Dallas is 1.8 months. The market remains competitive because demand outpaces supply.

In the wake of the pandemic, Dallas saw some major job losses. However, its economy has recovered quickly, with a 7.99% increase in jobs between May 2021 and May 2022. This is nearly triple the national average growth rate for jobs during that time period.

The leisure and hospitality sector added 61,400 jobs while the financial services sector added 27,800. Professional and business services gained 73,800 jobs in the DFW (Dallas/Fort Worth).

The city of Dallas is home to 22 Fortune 500 companies and 45 Fortune 1000 companies, including Exxon Mobil, Texas Instruments, AT&T, Core-Mark and DR Horton.

The population of Dallas has grown by an average of 193.48% more than the 0.71% average annual rate at which U.S. cities grew over the last 11 years. This growth is due in part to the large amounts of investment coming into the city, and the high number of companies that have relocated or expanded operations here—including Exxon Mobil, AT&T, and Apple.

The average household income in Dallas is $86,393 and the Dallas Metro has seen the largest increase in payroll growth since 2008, which also contributes to its economic growth.

Low costs and highly skilled labor keep the region on its growth curve, as companies in various sectors relocate or expand operations here.

Construction activity in Dallas is booming, with residential and commercial developments popping up all over the city. The multifamily market in particular is strong and tens of thousands of new units are added yearly. There is a lot of undeveloped land available in Dallas, Texas, which makes it an appealing city for real estate investors and developers.

The price to rent ratio in Dallas is 0.47, but in the neighborhoods where RealWealth members invest it’s an average 0.79%

Has some of the safest neighborhoods in Texas

In a recent study from personal finance website SmartAsset, 3 of Dallas-Fort Worth’s largest cities were ranked among the safest nationwide. In fact, Frisco was named the safest city in the United States, according to the study.

McKinney ranked second, moving up from third place last year; Plano moved down to nine from fifth place last year. However, Dallas has some neighborhoods that are not so pleasant. Cedar Crest, Wolf Creek and Cockrell Hill are three areas of the city that have high rates of violence and property crime.

The Hendricks, in Cedars Submarket

The Hendricks is a $57.8 million multifamily development that will be constructed in Cedars Submarket near Dallas, Texas. The building will be five stories tall, with 285 Class A apartments.

The Hendricks will have 64 studios, 177 one-bedroom and 44 two-bedroom apartments. Community amenities include pool & spa, rooftop deck, fitness/yoga studio, golf simulator and secured access. Construction of The Hendricks is scheduled to begin in the third quarter of 2022.

Dallas Towers in The Arts District

In late 2021, Atlanta-based real estate development firm Portman Holdings purchased most of a downtown block at Ross Avenue and Routh Street in Dallas. This block was located in the Arts District, just across from the Nasher Sculpture Center. In 2022, they began building the Dallas Towers on this site.

The Harold Simmons Park is the first of several parks planned along the Trinity River. It will be surrounded by two impressive bridges that cross the river—the Margaret Hunt Hill Bridge and the Ronald Kirk Bridge.

The banking giant Wells Fargo has big plans for the corner of West Las Colinas Boulevard and Promenade Parkway, where it’s building a two-building 22-acre office complex stretching along the north shore of Lake Carolyn. The Irving City Council threw its weight behind Wells Fargo’s plan to build a huge regional office campus with $30 million worth of tax incentives. The lakeside business center is expected to be completed by 2026 and will house 4,000 Wells Fargo employees.

Klyde Warren Park is a 5.2 acres deck space above Woodall Rodgers Freeway in downtown Dallas. The park provides a free space for the public to engage in various cultural activities, including yoga classes, musical concerts, and film screenings.

Klyde Warren Park is planning to build a new pavilion and additional public park space over Woodall Rodgers Freeway, just west of St. Paul Street. The $76 million project will add 1.7 acres to the Park. The Park is also soon to become home to the tallest interactive fountain in the world!