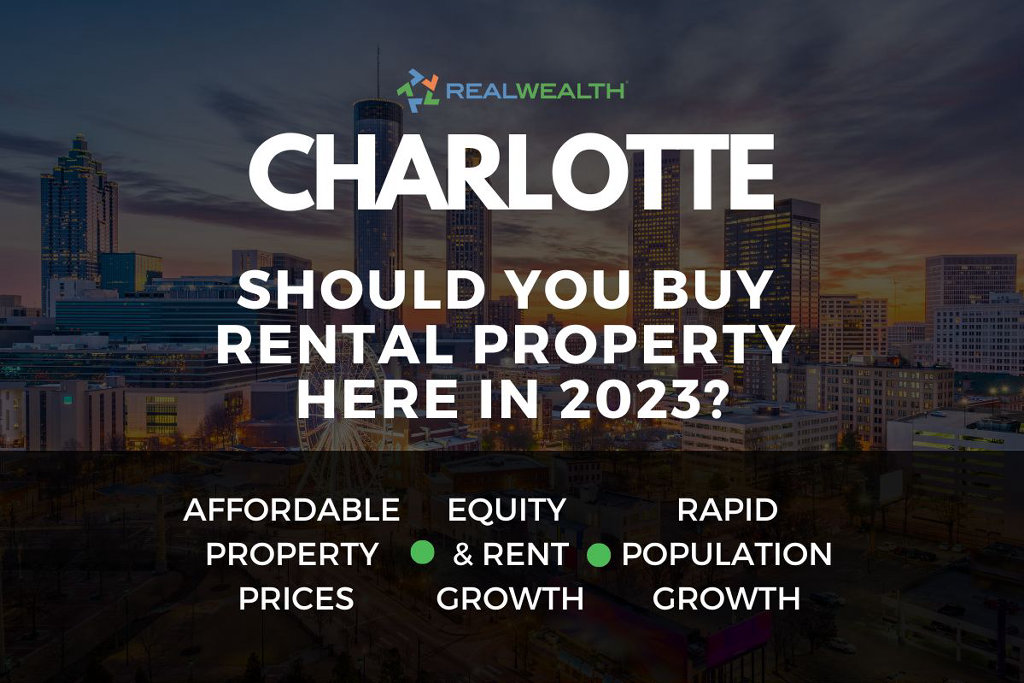 In recent years, the Charlotte metro area has seen considerable growth, with a 23.7 percent population increase from 2014-2025 expected to bring its population to 2.8 million people by 2025. In addition, 14 Fortune 500 companies will call Charlotte home by 2025—making it one of the most economically diverse cities in America.

Charlotte’s low cost of living when compared to salary has made it one of the best places to invest in real estate or start a business. Major companies headquartered in the area include Bank of America, Wells Fargo, Lowe’s Brighthouse Financial and Atrium Health. 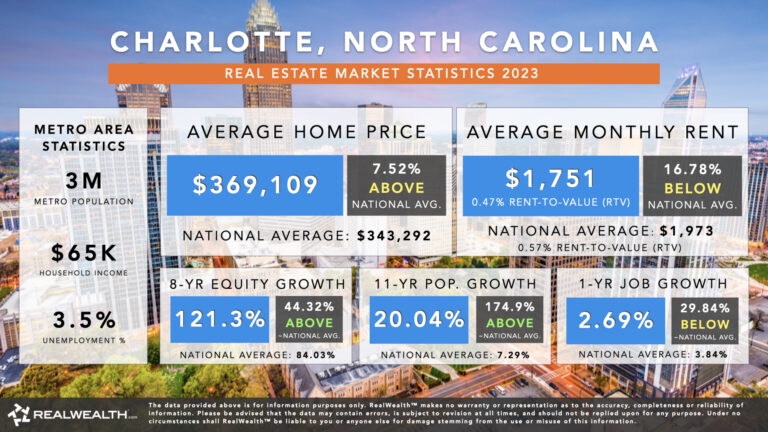 Charlotte has enjoyed a strong real estate market for more than a decade. And the city’s population is expected to grow nearly 50% from 2010 to 2030.

One of Charlotte’s most attractive features is the city’s relatively low cost of living compared to the national average. Charlotte has also seen strong equity growth in recent years, with over 120% increase in home values since 2014.

The following section describes the factors that make Charlotte one of the strongest real estate markets today. These include rapid population growth and strong equity growth, as well as rental growth. Click on the tabs above to learn more (on desktop). If you’re viewing this page on your mobile device, keep scrolling for more information! 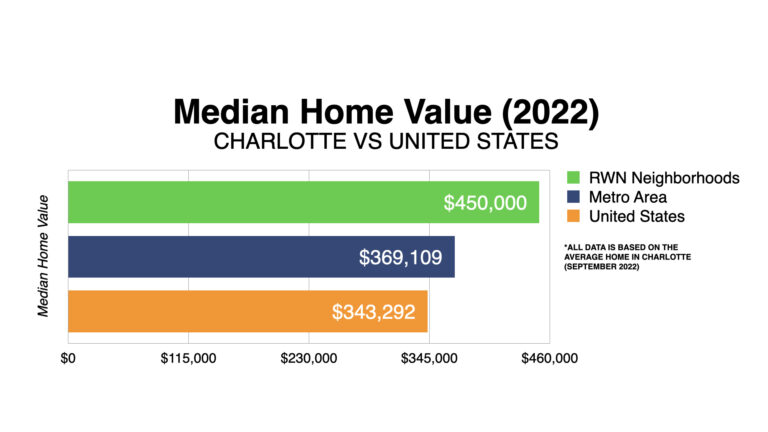 The reason for this is simple: real estate values are higher for newer properties in revitalized neighborhoods than they are for resale homes. And since RealWealth works with property teams that offer new construction properties as well as REAL Income Properties™, it makes sense that the average home price would be higher. 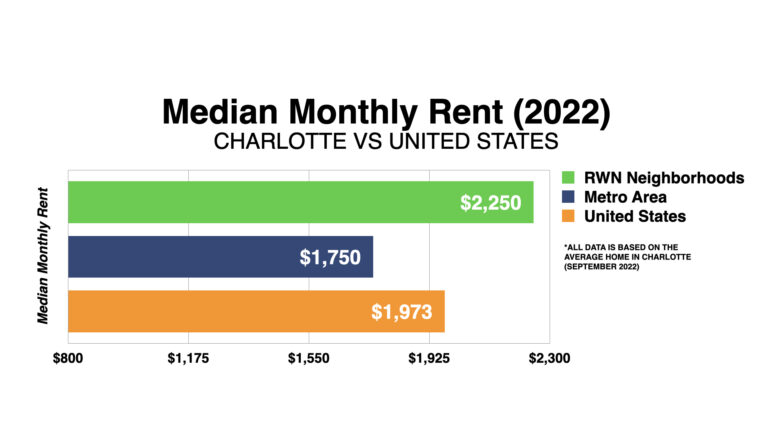 Rent for a typical Charlotte rental property averages $1,750 a month. The average monthly rent in places where RealWealth members invest is $2,250.

In Charlotte, the average RTV ratio is 0.47% for a typical investment. RealWealth investors here see an average RTV ratio of 0.5%. Both of these are lower than the national average RTV of 0.57%. In the past, investors typically sought properties with a 1% RTV ratio (i.e. conforms to the 1% rule). Nowadays, 0.7% is considered a good risk-adjusted return.

0.5% ratio is a good target for investors whose focus is long term appreciation. And Charlotte real estate is dependable in this regard.

It’s worth noting that the price-to-rent ratio in Charlotte is 17. This means that for residents, renting is more cost-effective than buying. 47% of households in Charlotte rent their homes which means there is a high demand for rental properties. 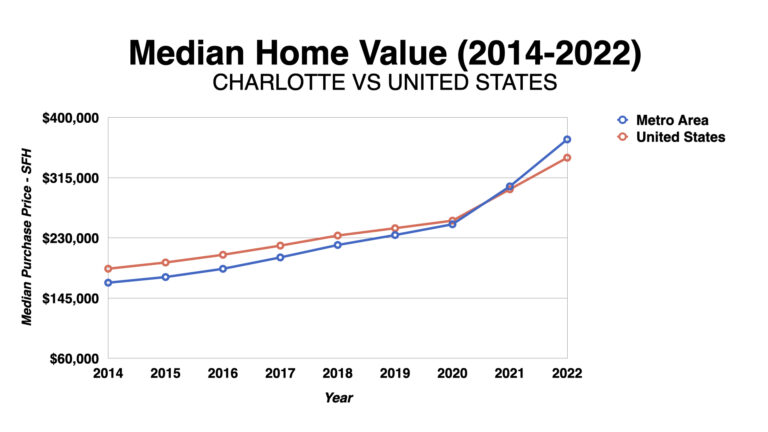 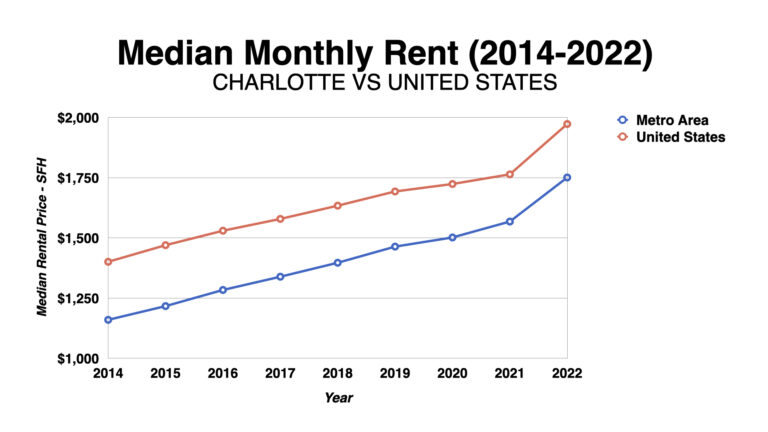 The median monthly rent in Charlotte has increased by 11.6% over the past year, from $1,568 to $1,750. Home values in Charlotte are growing at a rate that is more than twice that of rent costs. This is another reason why residents prefer to rent rather than buy a home. 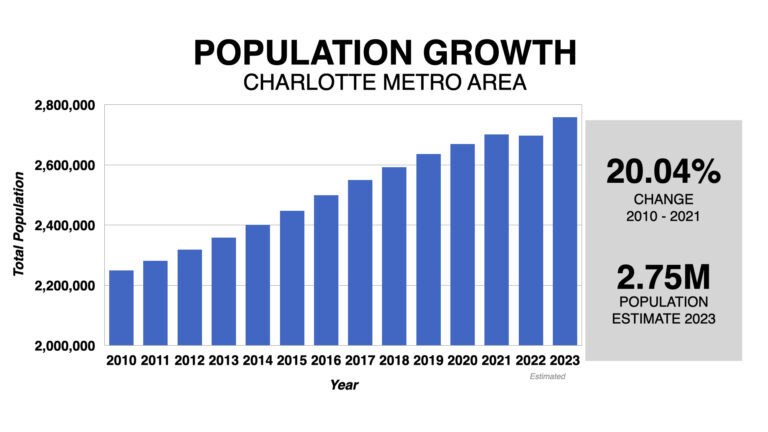 In fact, Charlotte’s total metro area population is predicted to reach 2.8 million by 2025—which would make it one of the top 10 most populous metro areas in America! 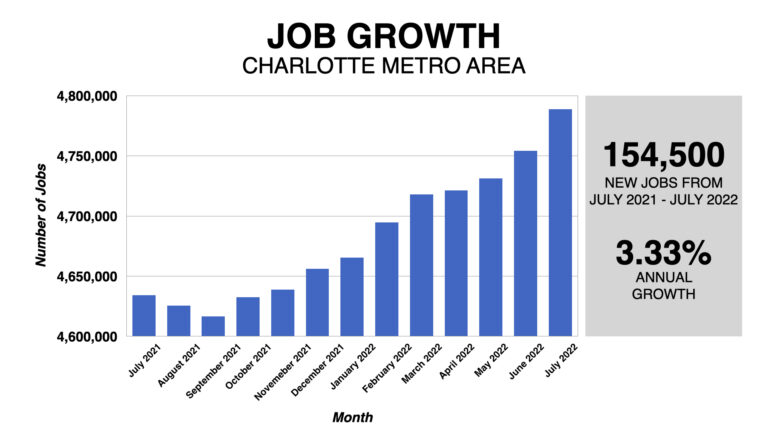 As the dust settles on COVID-19 and our economy continues to thrive, Charlotte is once again becoming a hot spot for job seekers.

The number of jobs in most industries has increased since the outbreak, and it’s not just because people are coming back to Charlotte—it’s also because companies are moving here!

The city is a popular destination for young professionals and families because of its excellent public schools, thriving economy, affordable housing, and low cost of living. Data from the Department of Numbers shows that Charlotte added 152,000 jobs between June 2021 and June 2022, a 3.3% increase over the previous year.

North Carolina plans to add 300,000 new jobs by 2028—and most of those jobs will be in Charlotte and Raleigh!

In addition to being an economic powerhouse for North Carolina, Charlotte is home to nine Fortune 500 companies and 16 Fortune 1000 companies—including Truist, Lowe’s, Bank of America, Ingersoll Rand, Duke Energy, and others.

The Charlotte real estate market is one of the hottest in the country. And the numbers don’t lie: average home equity gains from 2014 to 2022 are 121.7%, 44.3% greater than the national average for the same time period.

The city has a proven track record of being one of the best places for long-term real estate investments in the country, evidenced by its consistent rise in property value over the past few decades.

And it’s one of the hottest markets in the country right now. In April 2022, Charlotte tied Raleigh, Denver, and Seattle for second place on the list of cities with the lowest housing inventories in the country.

Demand outstrips supply. This creates an opportunity for developers, who build more homes to meet the demand, and investors, who buy homes in areas of high demand. Realtor.com recently reported that housing inventory is on the rise in Charlotte. The Queen City was ranked fourth among the nation’s 50 biggest metro areas with an increase of nearly 30% in newly listed homes for June—but demand for housing is still greater than the available supply!

The Charlotte metro area is estimated to have a population of 2.8 million by 2025, which means that there will be a lot more people who need homes!

Charlotte is ranked #5 among the top places where millennials are moving; with an influx of younger residents comes an increase in rental demand.

Over the last several years, Charlotte’s population and high-tech industries have contributed to making it one of the top markets for real estate investors and developers.

The average cost of living for one person in Charlotte is just under $950/month. This number doesn’t take into account rent and mortgage payments. A family of four can expect to spend about $3,400/month on living expenses without including rent or mortgage payments.

You’ll pay less than the average U.S. citizen on things like property taxes, transportation and health care costs in Charlotte. The city gets an overall score of 98.9 on Bestplaces.net’s cost-of-living index.

One of the best markets for buy and hold investors

Charlotte is known as the second-largest banking center in the United States, after New York City, with Bank of America and Truist Financial headquartered there. Wells Fargo has more than 27,000 employees in Charlotte alone.

Charlotte is also home to two healthcare providers: Atrium Health and Novant Health. They boast a combined annual revenue of $15 billion as well. Between May 2021 and May 2022, Charlotte gained 152,000 jobs—that’s a growth rate of 3.3%.

Because of the large number of students in the city, investing in apartments or other real estate near a college campus can be a smart strategy.

Centre South is a mixed-use development located in the historic South End neighborhood of Charlotte. The project, built by Boston developer The Fallon Company, will include affordable housing, retail stores, a hotel, and office space. Construction began on the first phase of the project in 2021—a 310,000 square-foot office building that will include affordable housing.

The project has been highly anticipated by residents of the area due to its location: it is near both Uptown Charlotte and Bank of America Stadium.

Charlotte’s new crown jewel, Seventh & Tyron will be the city’s most exciting neighborhood. This $600 million redevelopment is a coordinated effort by the city, Mecklenburg County, Charlotte Mecklenburg Library and Bank of America Corp.

The plan is to revitalize the area around Sixth, Seventh and College streets in uptown Charlotte. It will feature restaurants, shops and a library—all within walking distance of each other. This project will be a magnet for business and tourism and also be a modern day architectural marvel.

The Charlotte South End Apartment Tower is going up on the site of the popular Sycamore Brewery. The property is being redeveloped by Atlanta-based developer Portman Residential, who has already completed several other high-profile projects in Charlotte. The tower, which will be named 2161 Hawkins Street, will sit right off the Charlotte Rail Trail and the Light Rail Blue Line.

The new Portman apartment tower will feature 18,700 square feet of restaurants and shops that face both Hawkins Street and the Rail Trail.

The Duke Energy Plaza is a 40-story skyscraper under construction in Uptown Charlotte, North Carolina. It will be 597 feet tall when it is completed. After its completion, the new Duke Energy headquarters will be the third largest building in Charlotte by leasable square feet and serve as the company’s corporate headquarters.

Duke Energy’s proposed office tower will be able to fit up to 4,000 employees and contractors. It’s being built on South Tryon Street, next to the Gantt Center.

The City of Charlotte and Crosland Southeast plans to breathe new life into 77 acres of vacant land at the location of former Eastland mall. The project will increase housing affordability, and provide an economic spark for the area.

The site of the former Eastland Mall in Chicago will now be known as Eastland Yards. This new development will feature everything from single-family homes to affordable housing, signature recreational areas, and more.

Main Menu
RealWealth® is an educational company and is not acting as a real estate broker. Always seek the services of licensed third party appraisers and inspectors to verify the value and condition of any property you intend to purchase. Never send funds directly to a seller but instead, use the services of professional title and escrow companies. Check in with RealWealth® before purchasing property to verify that property teams and markets have not changed in quality or performance. RealWealth® does not provide legal, tax, accounting, or other professional advice. Nothing on this website email is intended to form a contract or binding legal commitment.
All content herein is the Copyright ©2023 RealWealth®
Main Menu
Scroll to Top