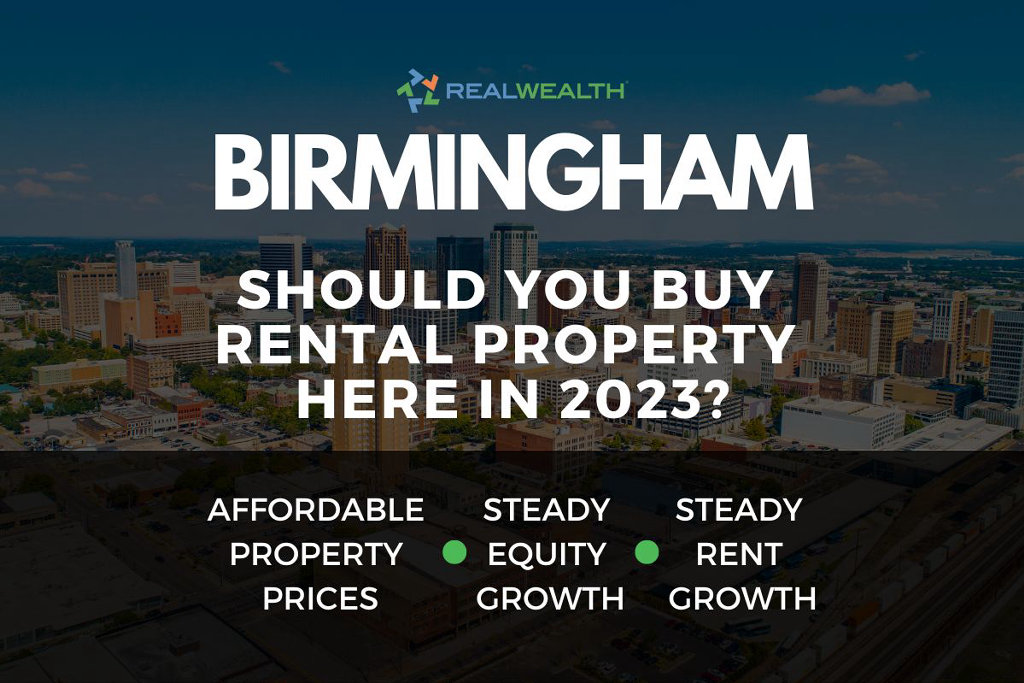 Interested in investing in the Birmingham real estate market in 2023? On this page you’ll learn about housing market trends and statistics to help you make that decision.

Birmingham is located in the north-central part of the state of Alabama and lies near the plateau of the Appalachian Mountains. It is also the county seat of Jefferson County, the most populous county in Alabama.

The Birmingham metropolitan statistical area, also known as Greater Birmingham, is the largest MSA in Alabama and the 50th most populous in the United States, with a population of about 1.12 million people. It consists of six counties (Bibb, Blount, Chilton, Jefferson, St. Clair, and Shelby) centered in Birmingham. Among the cities in Greater Birmingham are Bessemer, Homewood, Irondale, and Fairfield.

Birmingham was named after Birmingham, England, a major industrial city in the United Kingdom. The Magic City, so called because of the rapid growth rates it experienced during the industrial age, emerged as an iron and steel production giant in the Southern part of the United States.

The manufacturing industry in Birmingham still thrives today, but other industries, such as banking, construction, telecommunications, and healthcare have gained prominence as a result of diversification. Birmingham is also home to one Fortune 500 company, Regions Financial, as well as five other Fortune 1000 companies, contributing significantly to the city’s economic growth.

The city has a strong housing market, with prices rising steadily over the past decade. The local job market is also strong and expected to grow, leading to an increase in demand for housing. 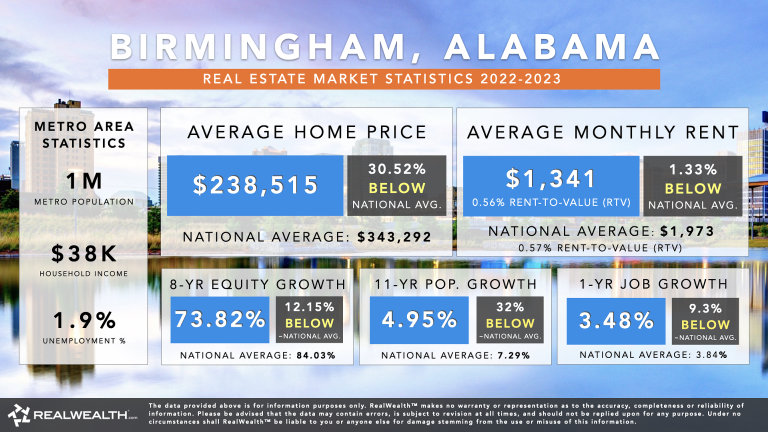 The Birmingham-Hoover metropolitan area has seen considerable economic growth in the last decade. Birmingham’s economy is well-diverse, with heavy investments in sectors such as banking, healthcare, education, manufacturing, and telecommunications. Based on the area’s competitive salaries and relatively low living costs, Greater Birmingham consistently ranks among America’s most desirable places to work and earn a living.

There are several factors that make Birmingham a favorable place for property investors in 2022. Among them are its affordable home values, passive income potential, and overall market stability over the last few years. The tabs above provide more information about housing market trends, population, and employment rates in Birmingham. 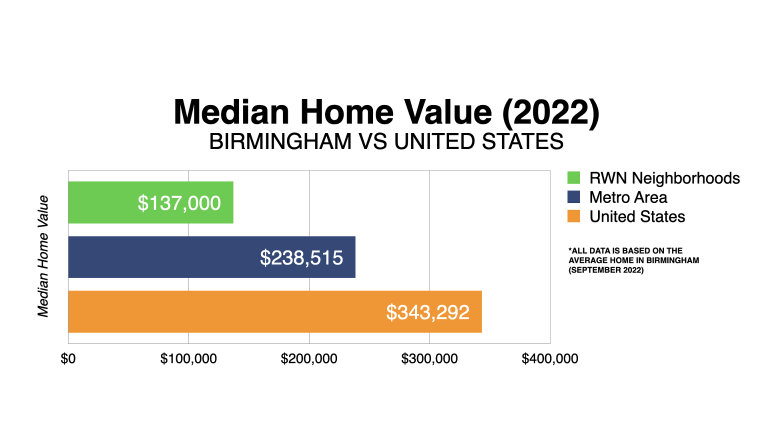 Birmingham’s home values are lower than many other U.S. markets. The average Birmingham home is priced at $238,514.86 in 2022, about 30% less than the national average. This shows that homes in Birmingham are comparatively more affordable than properties in other parts of the country.

Birmingham has an annual price-to-rent ratio of 14.8, according to RealWealth. Greater Birmingham also has a 0.56% rent-to-value ratio, about 1% lower than the national average. If you are not familiar with the metric, the rent-to-value ratio is a percentage that is calculated by dividing the potential monthly rental income from a property by the purchase price. In general, a higher rent-to-value ratio is better, with a rate of 0.7% or higher being ideal. 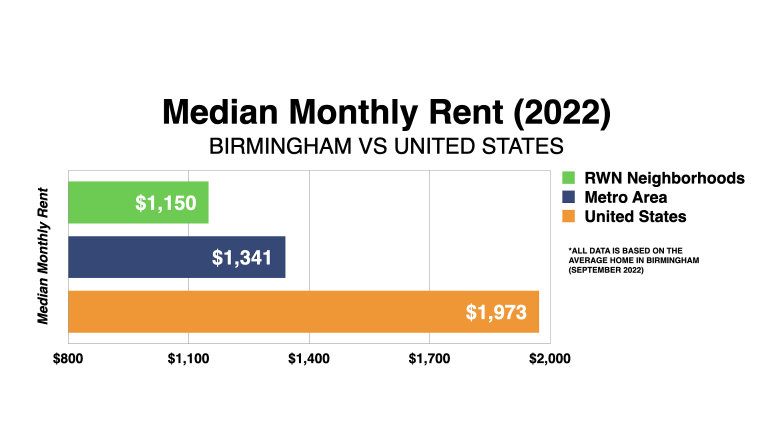 According to RentCafe, about 54% of the households in Birmingham are renter-occupied. The average rental price of homes in Birmingham in 2022 is $1,341.

Rent in Birmingham is also affordable, 32% less than the national average. Although rents are still going up in the country, Birmingham remains relatively affordable. 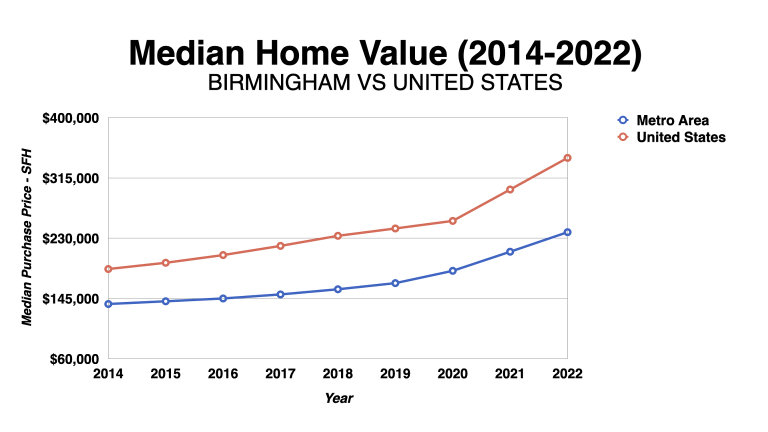 The rental market in Birmingham is more consistent than a lot of other markets in the United States. This makes investments in Birmingham less risky and significantly reduces the chances of prices suddenly declining. However, it also means that equity growth is slightly slower for homes in Birmingham.

In the Birmingham metro area, the average home has appreciated by 74% since 2014. This yields an average yearly appreciation rate of 8.22%. Homes in Birmingham are appreciating slowly but steadily. 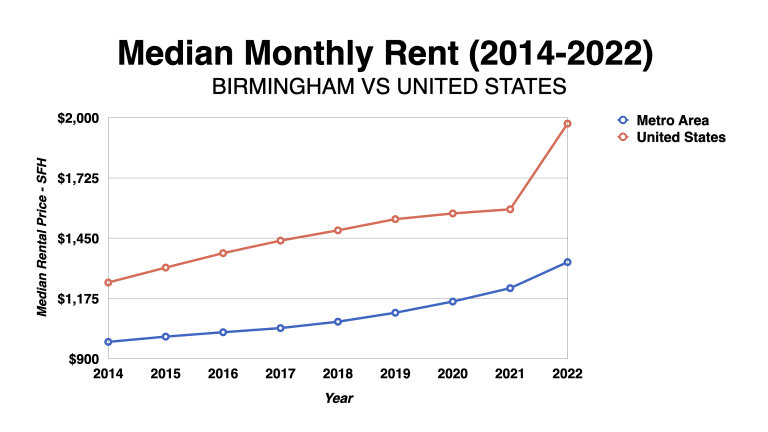 Monthly rent prices in Birmingham have increased by a total of 37%, since 2014. Although this is 8% less than the national average appreciation rate, it is worth noting that Birmingham properties have a considerable rent-to-value ratio, especially in RealWealth neighborhoods.

The average apartment rents for $1,341.43 monthly, 32% less than the national average. Consequently, these properties have a higher chance of yielding a positive return on investment for landlords, while still being affordable to renters. 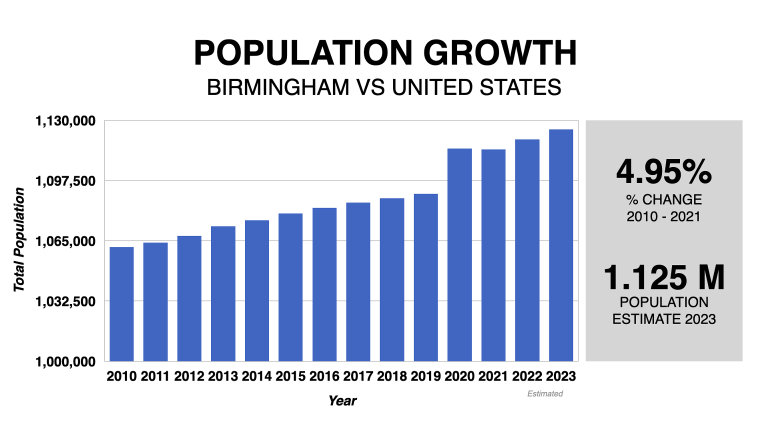 The Birmingham-Hoover, Al MSA has experienced consistent population growth since 2010 and is currently the largest region in the state of Alabama. By 2023, the population is estimated to reach 1,125,079, despite a slower growth rate than the national average.

The increased job opportunities in Birmingham, Alabama is one of the major factors responsible for the population growth. Population trends in Birmingham are influenced by Sun Belt migration, a continuing phenomenon from the 90s where Americans move from the Northern States to states in the South and Southwestern region of the United States in search of jobs and more favorable conditions of living.

The city of Birmingham seems to be losing residents to outbound migration, but the metro area is still growing consistently. 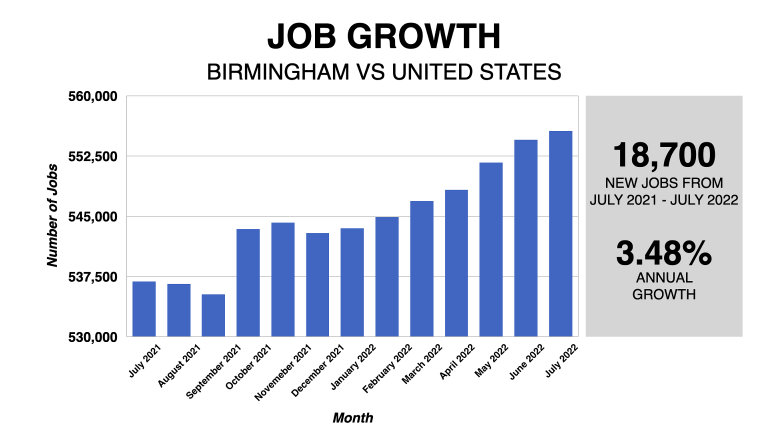 The job growth rate in the Birmingham metro area increased by almost 3.5% from May 2021 to May 2022, with 18,700 new jobs being created for Birmingham residents.

Birmingham has the highest per capita concentration of healthcare jobs nationwide. The online retail giant Amazon also plans to expand its footprint in the area, creating new job opportunities for residents.

Homes in Birmingham are affordable, compared to the rest of the country. The average value of Birmingham homes was recently valued at $238,514.86 for the first seven months of 2022, about 30% less than the national average. Homes can be purchased for less than 150k in Birmingham neighborhoods like FultonDale and Pleasant Grove.

A survey by Thumbtack ranked Birmingham as one of the top cities for millennial entrepreneurs due to its friendly local tax laws, and regulatory environment, as well as the numerous opportunities for training and networking. This is expected to continue as more tech companies flock to the area. Startups such as grocery delivery services and health companies are launching and flourishing in Birmingham, bringing new life and economic potential to the area.

Among the Best Cities for Job seekers

According to the U.S Bureau of Labor Statistics, the unemployment rate in Birmingham is at 2.8%, significantly less than the national average of 3.7 percent. In the past year, Birmingham has added about 16,000 jobs.

The University of Alabama at Birmingham is the largest employer in the area by far. Other large employers include the United States government, Regions Financial, Compass Bank, Honda Manufacturing of Alabama, Brookwood Baptist Health and Alabama Power Company.

The Birmingham property market is appreciating steadily, at a significant rate of 8% per year since 2014. Homes are rising in price as supply fails to meet demand. It is also fair to say that the housing market is fairly competitive, with homes moving fast and often selling above the list price.

Birmingham has seen less population growth in recent years, but the number of residents is still on the increase. The new developments in the area are bound to attract more migrants looking to move to the Sun Belt.

20 Midtown is a long-awaited mixed-use development between Southside and downtown Birmingham. 20 Midtown will include 312 residential apartments, ranging from 400 square feet to 1700 square feet, in its third phase. This five-story building will span an entire city block between 20th Street South and 3rd Avenue South once completed. This project is expected to be completed in late 2022.

With the reconstruction of the I-59/20 interstate bridges, the 31-acre area underneath has received new focus and is being developed into a public space that connects all of Birmingham. Visitors and residents can gather in the linear park, which includes a walking trail and sports fields. This development will span 10 city blocks from 15th Street North to 25th Street North and will make various amenities and facilities available for public use once fully open.

City Walk Bham will include several features such as a recreational sports space, a regional skate park facility, a performance space, an amphitheater, a dog park, pickleball courts, an outdoor space, and public restrooms. The skate park and roller rink are currently open and there are also plans for a dog park and a beer garden in the area.

The Tower on Tenth, formerly the Building Trades Tower, is a 12-story residential building located in Five Points South. The building has been vacant since a fire in October 2015. Restoration Capital Partners LLC, the new owner of the building, is planning to spend $40 million dollars on restoring the property. The aim is to transform the building into a residential workforce housing development.

It will house 242 studio and one-bedroom apartments. It will feature a billiards area, a gym with on-demand classes, app-based security, and a Starbucks in the lobby. The project is expected to be completed this year.

Leasing applications are now available for the apartment community and residents will begin to move in by November.

The Protective Stadium is owned and operated by the Birmingham-Jefferson Civic Center Authority. In exchange for naming rights, financial services company Protective Life will pay one million dollars per year for 15 years.

The stadium has a capacity of 47,100 and it hosted the opening and closing ceremonies of the 2022 World Games. It also serves as the home field for the UAB Blazer football team.