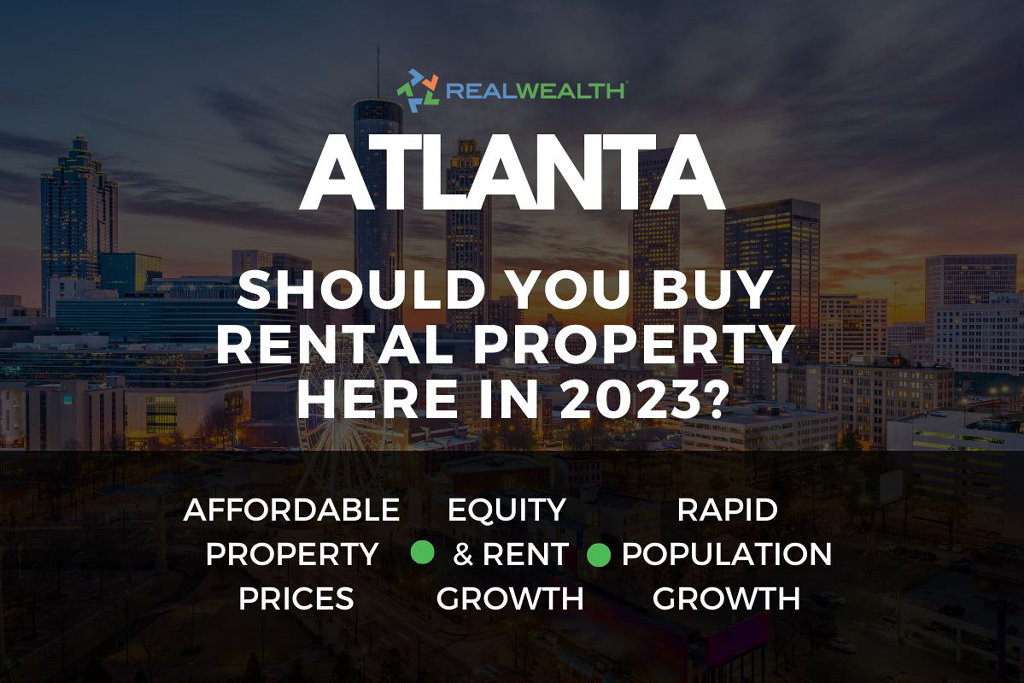 Interested in investing in the Atlanta real estate market in 2023? On this page you’ll learn about housing market trends and statistics to help you make that decision.

Atlanta is the capital of Georgia, located in Fulton County. It is Georgia’s largest city, with a metropolitan population of over 6 million.

In terms of the largest concentration of the Fortune 500 companies in the United States, Atlanta ranks third after New York and Texas. There are 17 Fortune 500 and 31 Fortune 1000 companies headquartered here.

The Bank of America Plaza in Atlanta, Georgia is the tallest building in the United States outside of New York City or Chicago. It stands at 1,023 feet tall and dominates the city’s skyline.

Atlanta is a city that combines the amenities and culture of a major metropolitan area with the affordability and familiar feel of a small southern town. You’ll find all kinds of restaurants, shops, art galleries, festivals and museums. Notable attractions include the Georgia Aquarium, Martin Luther King National Park, and the World of Coca-Cola. 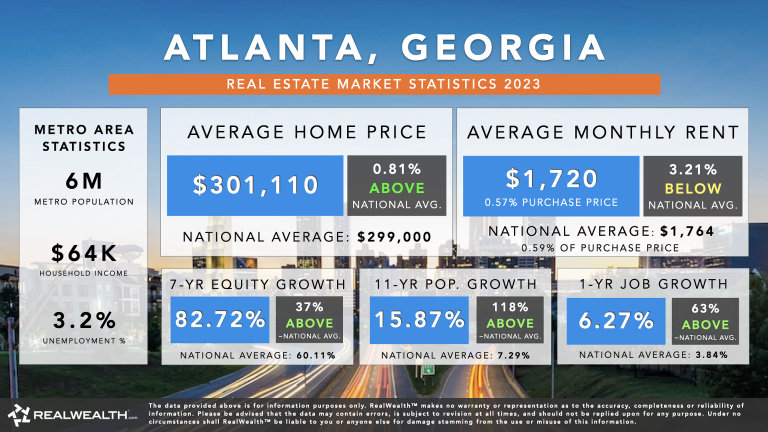 The Atlanta real estate market is one of the strongest in the US, and it’s only getting stronger. As the city’s population increases, so does its job growth and demand for housing.

In this section, we’ll discuss the top factors that make Atlanta one of the strongest real estate markets of 2022 and 2023. These include job and population growth, as well as cash flow and equity growth potential. Click on the tabs to learn more about housing market trends in Atlanta, including population and employment numbers.

Home prices in Atlanta are just about the national average. 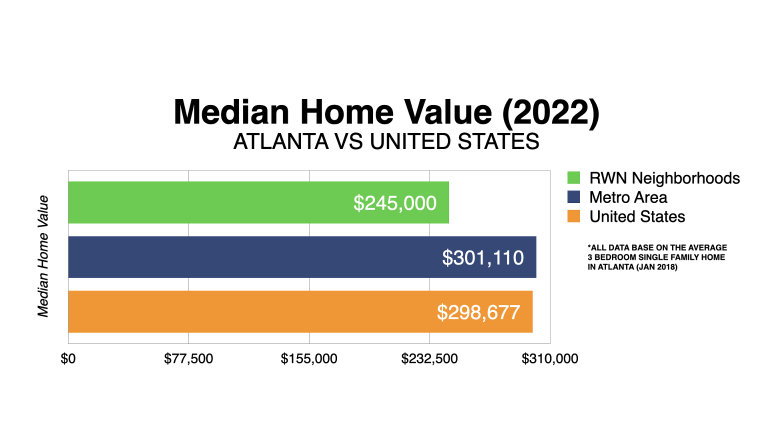 In the last year, Atlanta-area home prices have appreciated at an annual rate of 17.4%. That’s 9.84% lower than the national average annual appreciation rate of 19.3%. This shows that home prices in this area have been rising steadily but not at break-neck speeds.

Atlanta rents are strong at just slightly below the price to rent ratio of the national average. 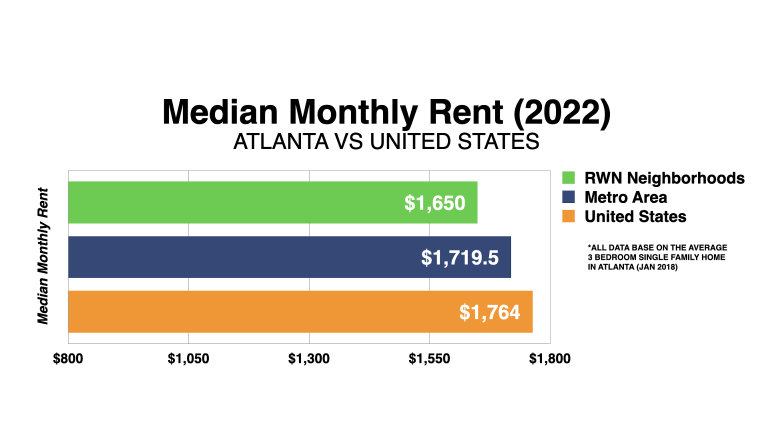 Many millennials are moving to Atlanta, drawn by its economic opportunities. As demand for rentals increases, we might see increased appreciation in Atlanta’s rent prices.

Atlanta has been appreciating rapidly. 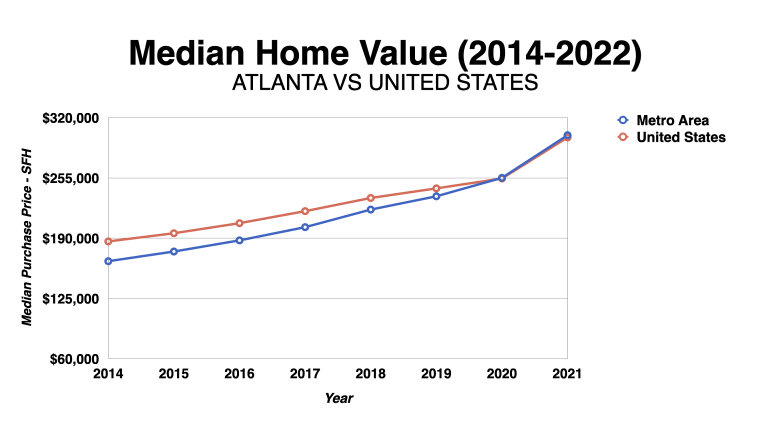 Real estate prices in Atlanta have grown at an annualized rate of 17.4% over the past year, according to our data. This kind of double-digit price jump is not new, as Atlanta’s real estate values have appreciated since 2014 at a median yearly appreciation rate of 10.52%. That is 36.86% above the US average home appreciation rate of 8.16% per year in the past 7 years, starting from 2014 to 2021. 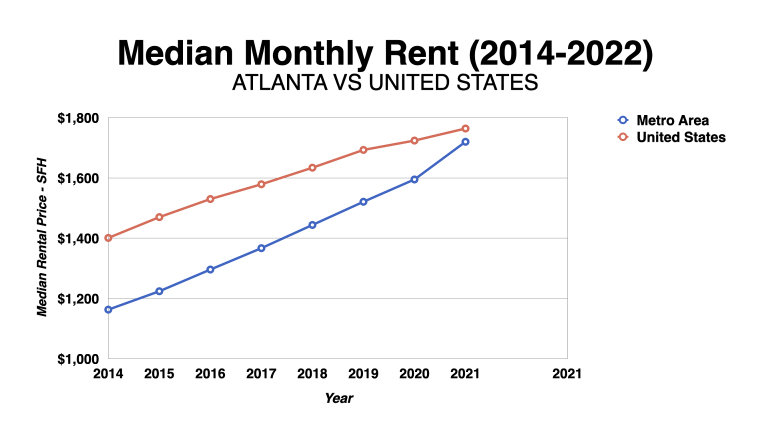 Atlanta rent prices have increased by 9.1 percent in the past year. RealWealth’s data tracking rental prices YOY from 2014, shows that rent prices in Atlanta grew by 6.73% yearly from 2014 to 2021.

Atlanta’s population has been growing rapidly over the last several years. 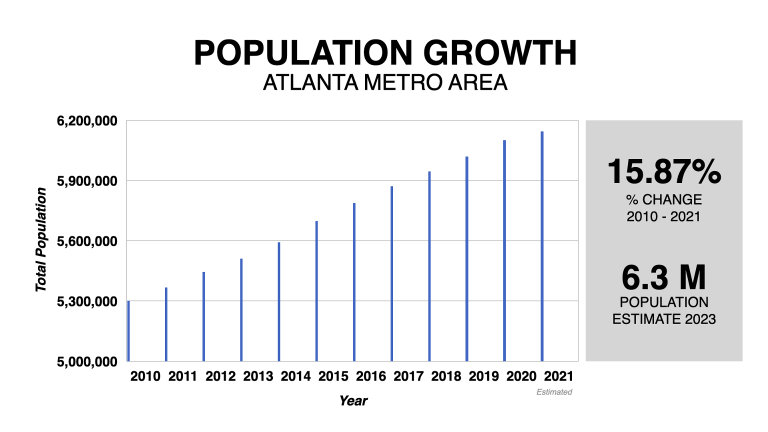 Atlanta has been experiencing much higher job growth than the national average. 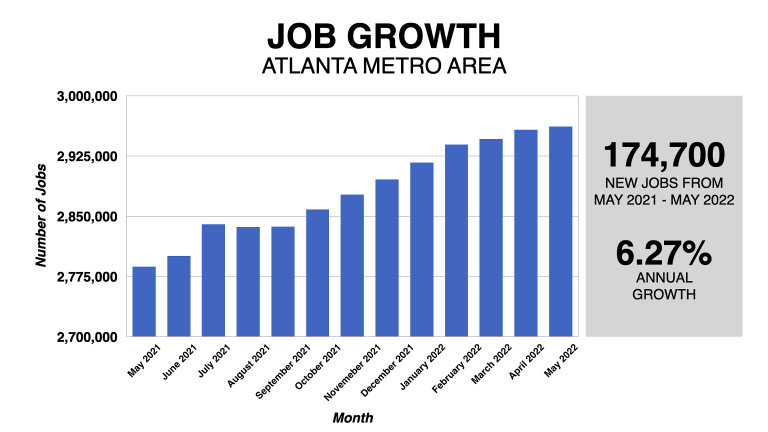 Atlanta’s economy has been growing rapidly over the last few years, and it shows in the data. According to the Federal Reserve Bank of St Louis, Atlanta’s GDP grew by over 31% over a 10-year period (through 2020), reaching a total of $370 billion dollars in 2021—which is more than that of many countries!

Based on data from the Bureau of Labor Statistics’ Current Population Survey, the Atlanta metropolitan area’s labor force hit nearly 3.12 million in May 2022. This is up over 124,000 compared to May last year. Also, according to the BLS, the unemployment rate in the Atlanta-Sandy Springs-Marietta area was 3.2 percent in March 2022. That’s 0.4 percent lower than the US unemployment rate of 3.6 percent during the same period.

When you’re making a decision about where to invest in real estate, the rent-to-value ratio (RTV) is something you want to pay close attention to. The RTV is a measure of how much rent you can charge for a property relative to what it would cost to buy that same property. In Atlanta, the average RTV is 0.67%. That’s almost 14% higher than the national average of 0.59%. So if you’re looking for a place where you can build wealth through rental income, Atlanta might just be the place for you.

Another thing to keep in mind when considering investing in rental properties is appreciation rates: how fast rents are rising compared with home values. In metro Atlanta right now, we’re seeing an appreciation rate of 107.7% higher than the US average. That means if you’ve got some capital sitting around and want to invest it somewhere that will grow faster than other places around the country, Atlanta might be just what you’re looking for (on top of being such an amazing city).

The state of Georgia is one of 25 that do not allow rent control. Landlords are free to charge whatever they think the market will bear, and there are no limits on late fees or security deposits.

The current property tax rate in Georgia is 0.91%, according to WalletHub.

In addition, Georgia has an informal eviction process. Landlords must give the tenant notice that rent is due but there is no specific notice period unless it’s spelled out in the lease. However, self-help eviction methods like changing locks are illegal.

Population growth is a sign of a healthy city. And Atlanta is doing great.

In the last decade, Atlanta’s population has increased by 15.87%, which is significantly more than the average US population growth rate of 7.29%. The city is also continuing to grow at a rate of around 1.5% per year. This means that Atlanta will be home to more and more people in the near future.

The biggest driver of population growth in Atlanta is jobs; with 17 Fortune 500 and 31 Fortune 1000 businesses based here, including Coca-Cola, Delta Airlines, Home Depot and Georgia Pacific, Deloitte, Equifax and The Southern Company.

According to Atlanta Realtors, as of May 2022 there was only about 1.2 months worth of inventory of homes available for sale. As the population grows, while home supply remains low, rent prices have increased by 9.1% year-on-year. The trend is expected to continue in coming months.

Atlanta ranked second behind Austin, Texas as one of the best US locations for commercial and multi-family property investment in a 2022 AFIRE (The Association of Foreign Real Estate Investors) survey. The survey polled 177 organizations in 23 countries, with about $3 trillion in assets total.

Atlanta has been recognized as a thriving innovation hub, one of the top 25 global startup ecosystems, and is considered one of the best states for Black entrepreneurs.

Planned developments can help you as an investor to estimate how the value of your property might change in the future. Here are some notable projects in the works in Atlanta right now:

The Atlanta BeltLine, an urban trail system that is transforming the city, has extended into two neighborhoods. The Eastside Trail has opened extensions through Old Fourth Ward and Reynoldstown.

The Eastside Trail is an approximately 2-mile (3-kilometer) extension of the Atlanta BeltLine that connects Piedmont Park to Cabbagetown. It includes a bridge over North Avenue and a tunnel under Ralph McGill Boulevard.

The Westside Trail runs from Adair Park to Washington Park, connecting with the Eastside Trail at Irwin Street. It includes a bridge over Lee Street and a tunnel under DeKalb Avenue.

The city of Atlanta is currently in the midst of a massive development boom that will leave it with one of the most vibrant new districts in the country. Centennial Yards, a $5 billion, 8 million square-foot development that will rise across the street from Mercedes-Benz Stadium, which will host several World Cup matches this summer, is one of the largest projects planned for Downtown Atlanta.

This summer, the city will also break ground on a 232-unit residential building and continue designing six additional buildings in The Gulch area of Downtown Atlanta. With over 3 million square feet of retail space planned for The Gulch alone and more than 250 acres available for future development, it’s no wonder that developers are flocking to Atlanta to start businesses and take advantage of its robust economy—which has been growing at one of the fastest rates in America for several years now.

The Atlanta International Convention Center is a three-facility complex in the heart of downtown Atlanta, offering customized spaces to suit your meeting or convention needs. Here, AmericasMart will debut Atlanta Next, which will enhance the convention experience on its campus through facility improvements, including a transformation of building spaces.

Underground Atlanta, the famous shopping mall in the heart of downtown Atlanta, has been an integral part of the city since its opening in 1969. Over the years, this historic area has seen its share of ups and downs—from being a bustling entertainment hub to becoming a ghost town.

But now, thanks to Lalani Ventures, Underground Atlanta is getting a new lease on life. Lalani Ventures is working to transform the historic streets of Downtown Atlanta into a destination for locals and visitors by turning old storefronts into art galleries, restaurants and entertainment spaces.

As the MARTA Five Points station undergoes a $150 million transformation, it’s clear that the central hub of MARTA’s rail system is about to become even more impressive.

The project will include a tower on top of the station and a new entrance at Peachtree Street. Work will first focus on underground platform enhancements, including new escalators and elevators as well as improved lighting and signage.

Planning on visiting Atlanta before you invest? You should know it’s illegal to carry an ice cream cone in your back pocket on Sundays. But it’s totally cool to do it Monday through Saturday. Oh, and it’s also illegal to tie a giraffe to a lamp post. 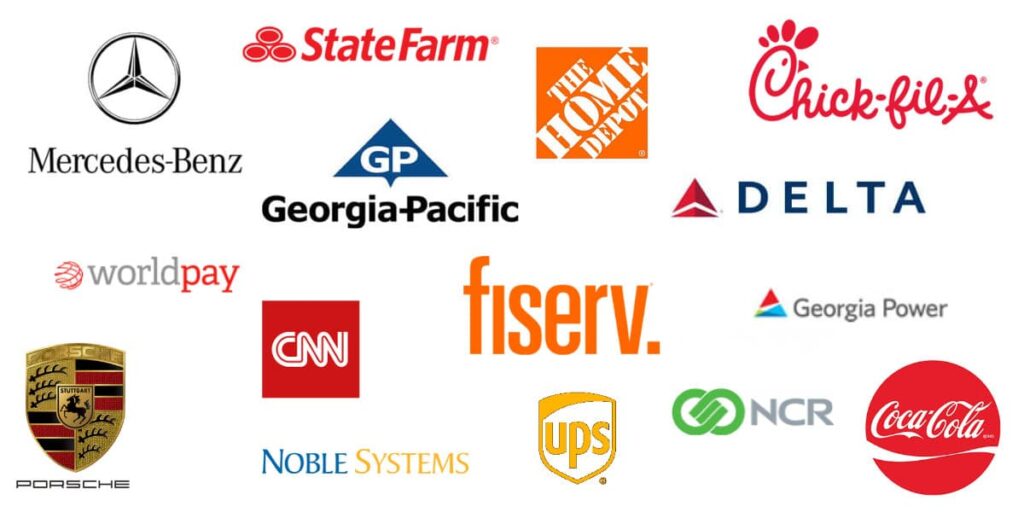