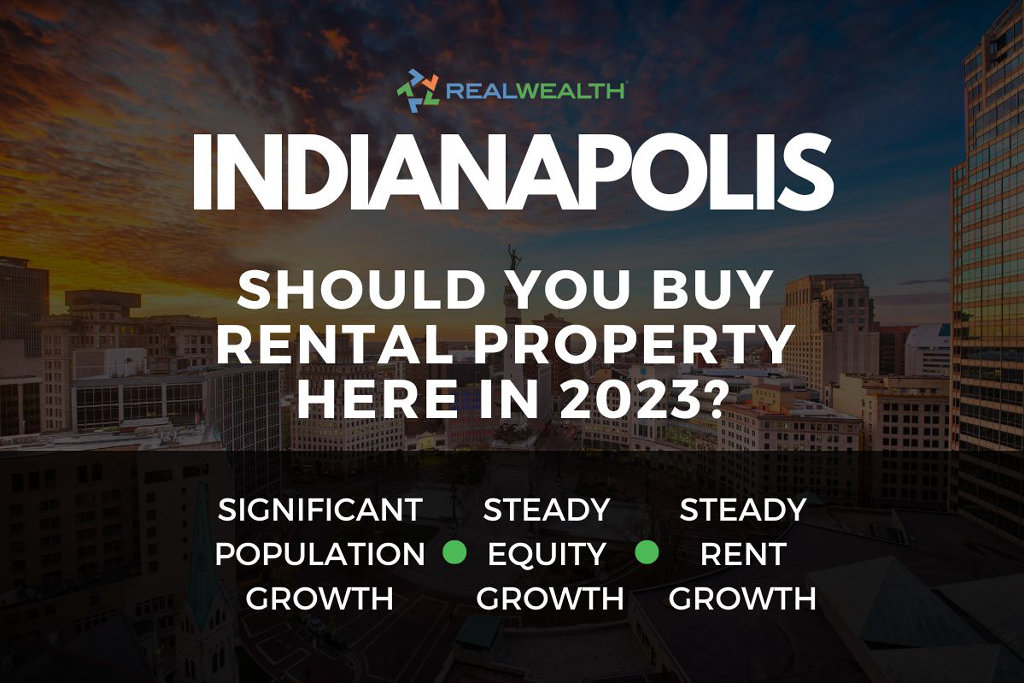 Interested in investing in the Indianapolis real estate market in 2023? On this page you’ll learn about housing market trends and statistics to help you make that decision.

The capital and largest city of Indiana, Indianapolis has a metropolitan area population of over 2 million people. Its downtown district ranks among the best in the U.S., according to Livability.com. And it boasts two major league sports teams—the NBA Indiana Pacers, who play at the 18,000-seat Conseco Fieldhouse, and the NFL Indianapolis Colts, who play at the 56,000-seat RCA dome.

The city of Indianapolis is also home to over 150 tech companies, including Salesforce, Angie’s List, MOBI and TechPoint. 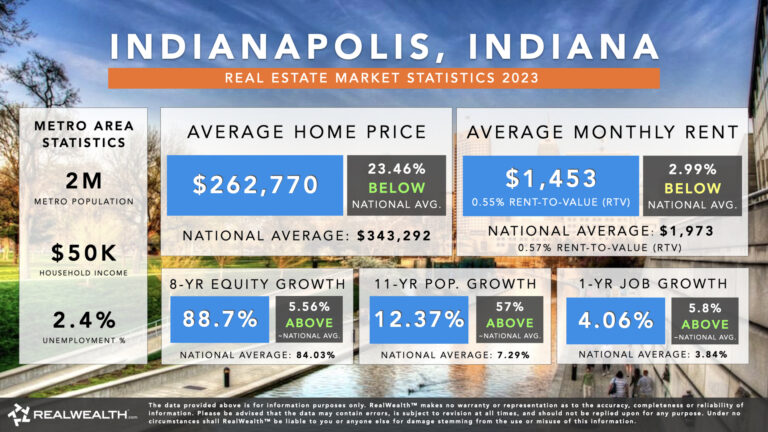 In this section, you’ll learn about the top factors that make Indianapolis one of the strongest real estate markets today, including: affordability, cash flow, population growth, and job growth. 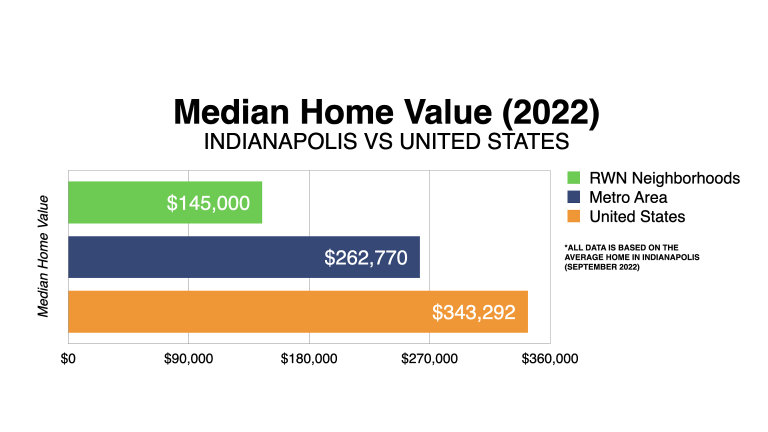 Indianapolis is a city with a lot of history, and its real estate market has seen its share of ups and downs.

In neighborhoods where Realwealth members invest, the median home value is $145,000 in 2022. That’s 58% lower than the US average.

Indianapolis’s real estate market is very competitive, with a Redfin Compete score of 82 out of 100. 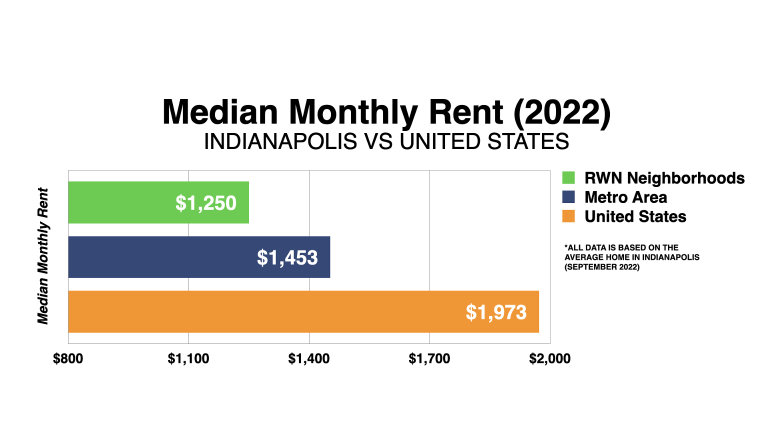 The median monthly rent in Indianapolis is $1,453, which is 26% less than the national average. In the neighborhoods where RealWealth members invest, rents for single-family homes average $1,250.

The price to rent ratio in Indy is 15, indicating that buying is slightly more affordable than renting here. 46% of Indianapolis households rent their homes, providing a solid opportunity for investors. 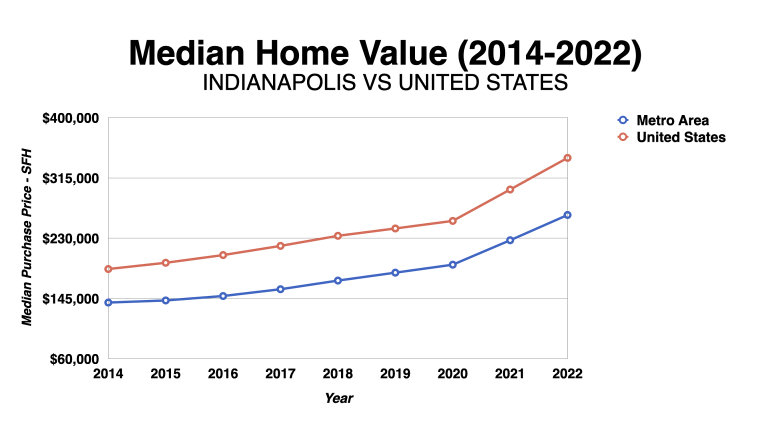 In the past 8 years, home prices in Indianapolis have appreciated by 88.7%, growing at a rate of 9.5% annually.

The rate of equity growth in the Indianapolis real estate market over the past 8 years exceeds the national average by 5.56%.

Home prices in Indianapolis have been increasing steadily since 2010. The city’s improved economy and low inventory of homes for sale have contributed to this trend. Realwealth data indicates that home prices appreciated on average by 15.7% from $227,140 to $262,770 between July 2021 and July 2022. 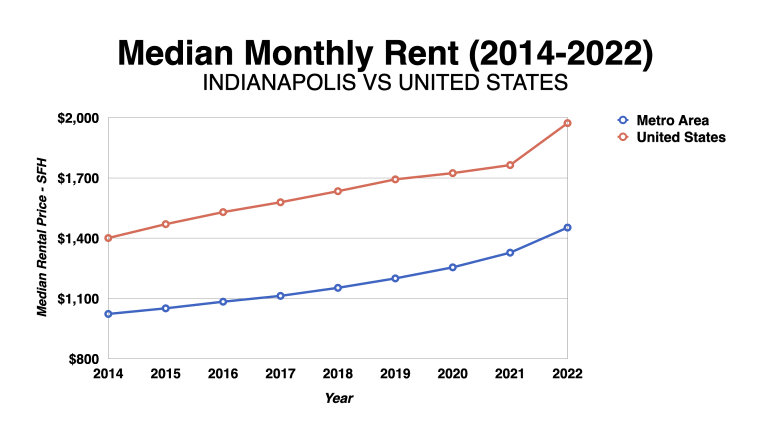 Indianapolis’ median rent appreciation has been on the up-and-up over the past 8 years, increasing by 42 percent between July 2014 and July 2022.

The average annual rental price appreciation rate has been 5.13% since July 2014, while total rent price growth has been nearly identical to the national average of 2.7%. This indicates that rent appreciation in Indianapolis has historically been in sync with national trends—a sign of a stable real estate market! 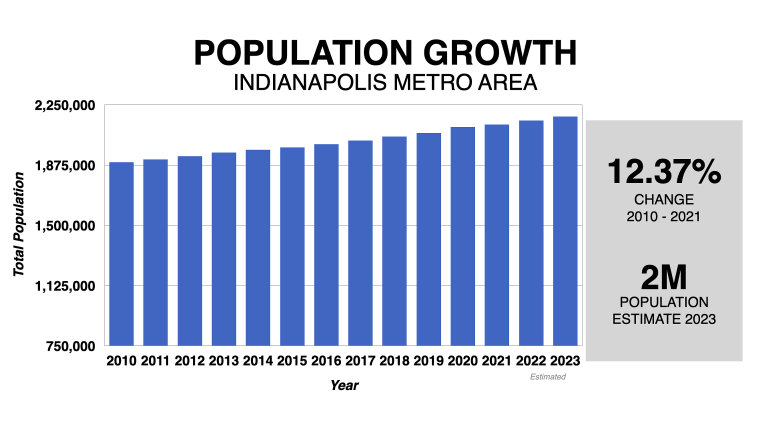 The Indianapolis-Carmel-Anderson metro area is the 32nd most populous metro area in America, with a current population of 2.12 million people. And it’s growing—fast! The city’s population is growing at the rate of 1.17% per year, which is 69.72% greater than the average growth rate of the US.

Indianapolis has been able to attract new residents due to strong job growth, a relatively quick recovery from the Great Recession, and a moderate cost of living.

Indianapolis has been experiencing an influx of young professionals and their employers alike, thanks to its growing technology industry and bustling economy. In fact, between July 2021 and July 2022, the Indianapolis economy added 236,600 jobs.

The tech industry is growing rapidly in Indianapolis. The CEO of Salesforce has even said that Indianapolis is “the best kept secret in the country.” Major employers in Indianapolis include Indiana University Health, Eli Lilly and Company, Walmart, Amazon and Kroger —and that doesn’t even include all of the startups and small businesses that are popping up here!

Although the Indianapolis real estate market is very competitive, prices of homes are still affordable. In fact, the average price of a home in Indianapolis is $262,770. This is 23% lower than the national average! The most affordable neighborhood in Indianapolis is Chesterfield, where the median home price is $110,000.

Indianapolis is ranked #5 for top cities where you can live really well on a $60,000 salary.

Indianapolis is a city that attracts many investors because it is considered a “cash flow market.” Property values tend not to fluctuate dramatically, making it a relatively stable market.

Indianapolis neighborhoods where Realwealth members invest have an average rent to value ratio (RTV) of 0.86 percent, 51 percent higher than the national average.

Indianapolis is one of the fastest-growing cities in the United States.

In fact, it’s been experiencing a steady increase in population and economic output for several years now, and it does not appear that this trend will cease anytime soon.

Indianapolis is the largest city in Indiana by population. Fort Wayne, the second-largest city, is about one-third the size of Indianapolis.

Job growth rate is higher than the US average

The city of Indianapolis has seen a lot of job growth over the last several years. In fact, according to a 2017 Forbes article, Indianapolis ranked fifth on the list of top cities for tech jobs.

With a job growth rate of 4.06%, Indianapolis has created almost 6% more jobs than the average American city during the past 12 months.

Indianapolis is a city that is growing fast, and the housing market is no exception. In fact, home prices have appreciated by 88.7% over the last 8 years, growing at a rate of 9.5% annually.

According to Apartment List’s September 2022 data, the average vacancy rate for Indianapolis rental real estate is 4.7%. This means there is plenty of demand for rental properties, rents are increasing steadily, and the vacancy rate is low. This combination of factors will lead to steady rent growth in the future.

This $175 million partnership between the city of Indianapolis, Gershman and Citimark, envisions a mixed-use facility at the city market campus.

The project will also include an upgrade of the 20-story Gold Building into 350 apartments, as well as an expansion of the market itself.

When the Polk Sanitary Milk Company opened in 1906, they built a three-story stable on 16th Street, with 21,000 square feet of space for their mules. The building had now become dilapidated and had to be torn down.

In its place is a new development that will bring together makers, co-working spaces for entrepreneurs, and artists—all under one roof. The project is located in Indianapolis at 16th Street & the Monon Trail, which is both a Federal Promise Zone and an Opportunity Zone.

The redeveloped Polk Stables will have space for COhatch co-working spaces; a maker’s space with 3D laser printing and cutting equipment; and artist studios.

The Stutz redevelopment project covers 441,000 square feet of leaseable space on 3.8 acres. It spans 7 buildings between 10th and 11th streets and Senate and Capitol avenues in downtown Indianapolis. The iconic four-story factory building with sawtooth glass-pane rooflines is easily accessible from I-65 and I-70, putting it within walking distance of many of the city’s most popular attractions.

Inside, there will be retail and gallery space, as well as a museum honoring the cars made by Stutz. Phase One of the project is now under construction, with completion scheduled for early 2023.

Block 20 is a mixed-use development consisting of apartments and retail space, which will be built next to the Athenaeum and Rathskeller. The project received support from the Athenaeum Foundation, City of Indianapolis and State of Indiana.

The project will consist of 78 apartment units, 5,500 square feet of commercial space, and 255 parking spaces. Public art would be displayed throughout the development.

Boxcar Development LLC is proposing to develop a mixed-use development at the site of the former CSX building across the street from Gainbridge Fieldhouse in downtown Indianapolis.

The project is led by Herb Simon, who also owns the Indiana Pacers. Main Menu
RealWealth® is an educational company and is not acting as a real estate broker. Always seek the services of licensed third party appraisers and inspectors to verify the value and condition of any property you intend to purchase. Never send funds directly to a seller but instead, use the services of professional title and escrow companies. Check in with RealWealth® before purchasing property to verify that property teams and markets have not changed in quality or performance. RealWealth® does not provide legal, tax, accounting, or other professional advice. Nothing on this website email is intended to form a contract or binding legal commitment.
All content herein is the Copyright ©2023 RealWealth®
Main Menu
Scroll to Top