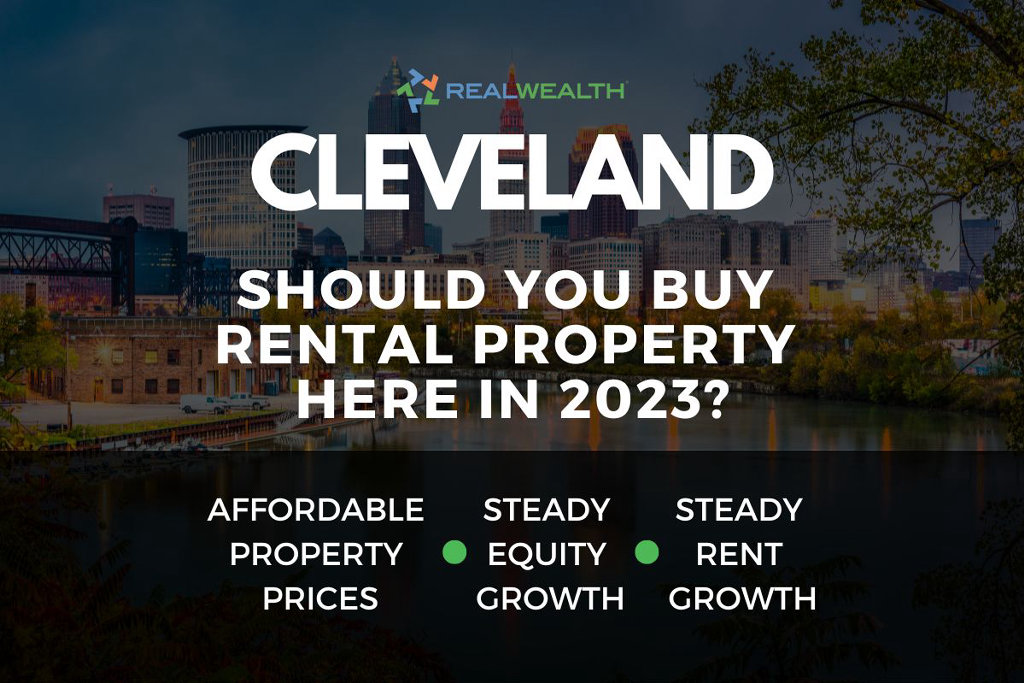 Interested in investing in the Cleveland real estate market in 2023? On this page you’ll learn about housing market trends and statistics to help you make that decision.

The city of Cleveland, located along numerous transportation routes as well as near large deposits of coal and iron ore, prospered during the late nineteenth century. In 1867, John D. Rockefeller and his partners began the Standard Oil Company in Cleveland. At the same time, Samuel Mather began steel production in the city, furthering its economic importance.

Since then, many other businesses have been established in Cleveland, including those specializing in banking, insurance and publishing. Its proximity to Lake Erie has also made it a major port for freight ships.

Cleveland is located near the mouth of the Cuyahoga River and covers 100 miles (160 km) along Interstate 90, including parts of Cuyahoga, Lake, Geauga, and Medina counties and more than 70 suburban communities. In recent years, Downtown Cleveland has undergone an economic renaissance with over $19 billion in development completed or planned.

Cleveland’s healthcare economy is also one of the fastest growing in the United States thanks to its world-class hospitals such as University Hospitals Case Medical Center. 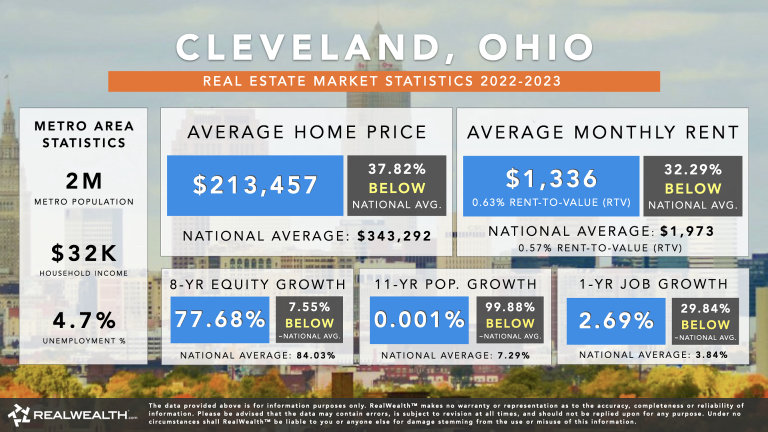 Cleveland has a population of 372,101 people, making it the second-largest city in Ohio. Cleveland’s growth is driven by industrial, healthcare, and tech companies that are drawn to the metro’s affordable cost of living and friendly business environment. In a recent report by Redfin, Cleveland was named the 5th most resilient housing market in the U.S. This means that Cleveland’s real estate market will continue to grow for years to come.

In this section we explore why Cleveland is one of the strongest real estate markets of 2022. We will look at factors such as job growth, population growth and equity growth potential. Learn more about Cleveland’s housing market, population and employment trends in the tabs above. 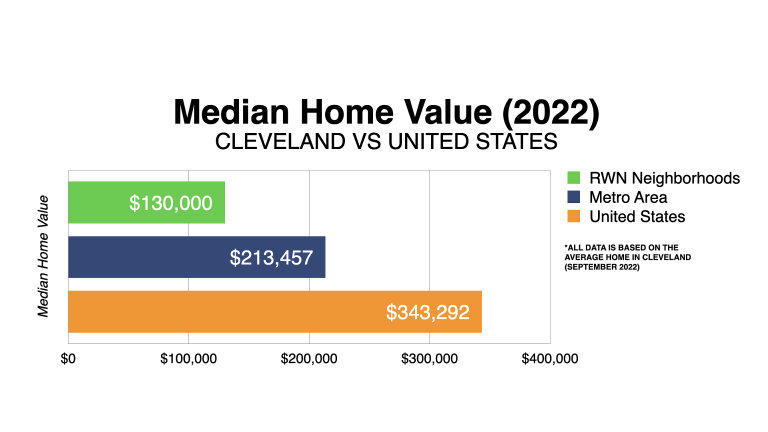 If you’re looking for a good ROI on your real estate investments, Cleveland is the place to be. The average rent to value ratio for Cleveland investment properties is 0.63%, which is 9.79% greater than the national average.

The price to rent ratio in Cleveland is 13.3, which makes owning a house a bit more affordable than renting. Yet more than half (58%) of Cleveland households rent their homes. This means there’s a huge demand for rental housing in the area—and that means opportunities for buy and hold real estate investors! 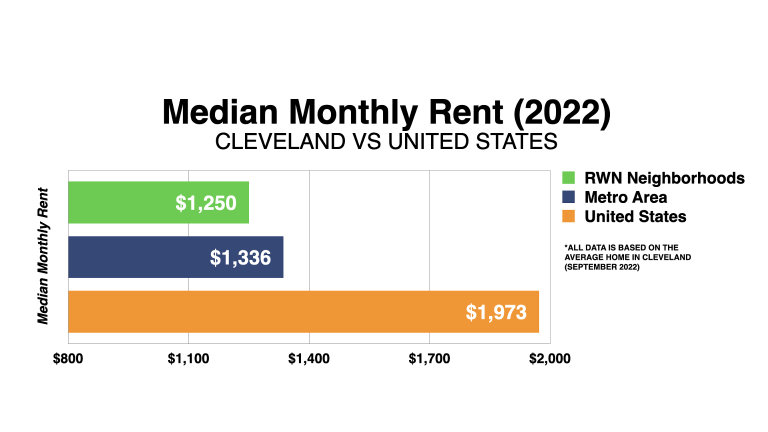 Cleveland is one of the most affordable cities for renters in the United States. In 2022, the average rent for single family rentals or apartments in the Cleveland metro area is $1,336 per month. That’s 32% cheaper than the national average price for similar properties!

If you’re looking to invest in property, you’ll find that there are a large number of foreclosures around for investors who want to buy distressed real estate. And no matter what type of property you choose to buy, Cleveland offers opportunities to generate steady monthly cash flow. 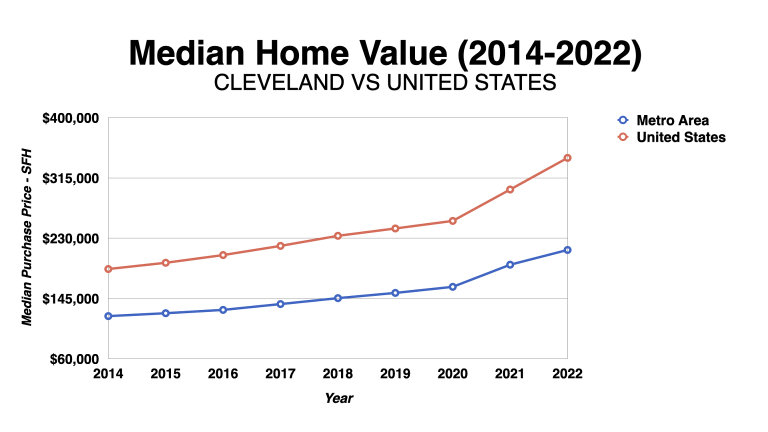 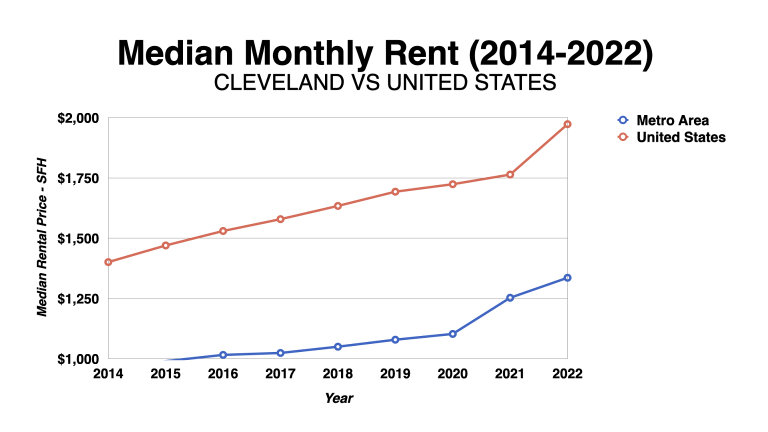 Since 2014, Cleveland’s median rents have appreciated by a total of 39.48%, about 3.17% lower than the national total rent appreciation rate for the same period.

The average yearly rate of rent appreciation in Cleveland over the past 8 years is 4.88%. 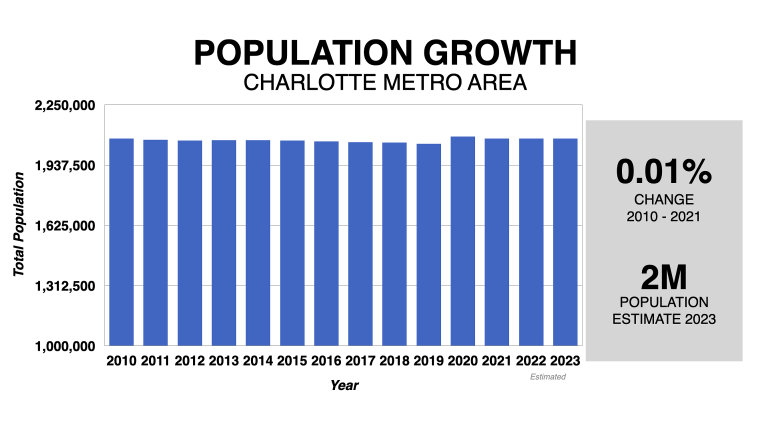 In the last eight years, population growth in Cleveland has been static. The Cleveland metro area population has hovered around 2,075,000 since 2010. But as Cleveland continues to attract jobs and new residents, as well as new housing developments, it’s poised for future growth.

Developers estimate that in the next five to ten years, Cleveland’s University circle neighborhood alone will need up to 10,000 housing units. Those units could be satisfied with at least several dozen large apartment buildings and hundreds of townhomes. 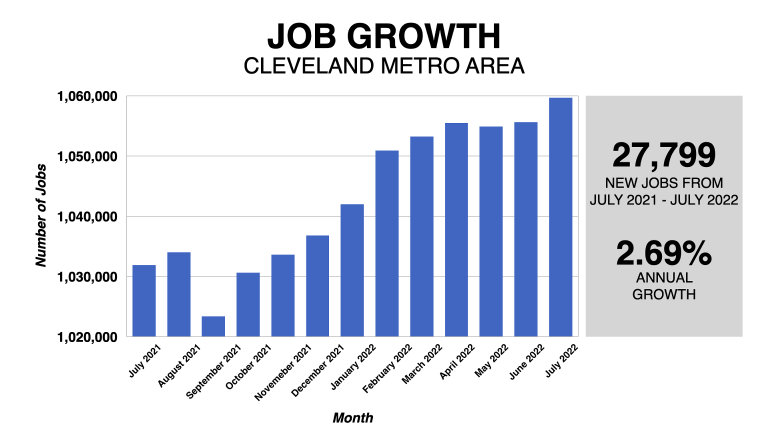 The Cleveland-Akron area is home to 10 Fortune 500 companies, five of which are in Cleveland, two in Akron and one each in Mayfield, Westlake and Wickliffe. They include Progressive Insurance Company, Cardinal Health Inc., Goodyear Tire & Rubber Company, FirstEnergy Corp., Parker Hannifin Corp., TravelCenters of America Inc., and J.M. Smucker Co.

MoneyGeek ranked Cleveland on its list of the best cities for job seekers in 2022. The Cleveland area’s unemployment rate is 6.8%, close to the national average of 6.0%. But job growth has been positive in recent years. According to the Department of Numbers, Cleveland gained 31,500 new jobs between July 2021 and July 2022, an increase of 3.07%. The healthcare and social assistance industry is the biggest employer of labor in Cleveland.

The Cleveland housing market ranks among the least costly of major metropolitan areas in the US. In fact, you can find homes for as little as $109,900 that will rent for $1,150 per month. This means there’s a good opportunity for cash flow in this market.

You can also hunt for bargains in Cleveland by purchasing distressed properties at low prices. However, some of these homes require major repairs due to neglect over the years.

Cleveland has a real estate market that is one of the least risky in terms of its vulnerability to a price dip. This means that the city’s residential real estate prices are expected to continue to increase over the next several years.

The Cleveland metro region has experienced an average annual rate of 8.56% in home price appreciation over the past eight years.

In Cleveland, approximately 58% of households rent their homes. Over the past 8 years, rents in Cleveland have increased at a steady rate of 4.88% per year. However, some parts of the city have seen rents rise far above the average.

These areas include downtown and neighborhoods along Euclid Avenue and Huron Road, as well as University Circle.

Cleveland is a great place to start a business. In fact, the city was ranked among the top 50+ entrepreneur-friendly cities in the United States in 2015. And it’s not just startups that are flocking to Cleveland—established companies are coming here, too!

The state of Ohio itself offers a number of business-friendly incentives, including affordable commercial space, a skilled and high-quality workforce, and a 0% tax rate on corporate income. Venture capital firms and angel investment networks like North Coast Angel Fund and Akron Archangels are helping to fund startups in Cleveland.

Cleveland is home to a number of global companies and institutions, as well as several smaller businesses that have found success in the city. The Department of Numbers reported that Cleveland added 31,500 new jobs between July 2021 and July 2022, a 3.07% increase in jobs. Despite experiencing weaker job growth than some of its peers, Cleveland’s per capita GDP surpassed several Sun Belt cities such as Phoenix and San Antonio.

Cleveland has a lot to offer, and one of its biggest selling points is its cost of living. It’s 27.4% lower than the national average, so housing, groceries, transportation, utilities and entertainment are all notably less expensive here.

The seventh best food city in America according to TIME magazine, Cleveland has a mix of upscale restaurants and classic staples. The city has a bike-sharing program that makes cycling an option for getting around.

The Opportunity Corridor is a three-mile, $257 million freeway project linking University Circle and the freeway. Phase 3 of the Opportunity Corridor project is currently under construction, and will create a new roadway from I-490/East 55th Street to East 93rd Street. The roadway is expected to be completed by fall 2022.

This project is a 35-mph urban boulevard with a wide median and traffic lights at intersections built to help spark economic development in a neighborhood of Cleveland dubbed the “Forgotten Triangle.”

City Club Apartments is a mixed-use apartment building with office and retail space that is being built in the heart of downtown Cleveland. Construction began in December 2021, and pre-leasing is expected to begin in the fourth quarter of 2022. The building’s projected construction costs range from $85 million to $100 million, based on the cost of two other Euclid Avenue apartment towers built in the last two years — Beacon and Lumen.

Overlooking Euclid Avenue and Public Square, City Club Apartments features 304 luxury apartments and penthouses, a restaurant and retail space, and a dog daycare. The 250,000-square-foot tower is proposed to reach 241 feet in structural height and a rooftop decorative element could bring that to about 250 feet.

Sherwin-Williams, the paints and coatings manufacturing company, is building a new Global Headquarters in downtown Cleveland, Ohio. The new building is estimated to be one million square feet and will include a two-story pavilion facing Public Square, a 36-floor office tower and an attached parking garage. It is expected to open by the end of 2024.

The Centennial Building is a renovation project transforming the former Centennial Bank building, which was built in 1923, into a modern office and residential building. The project is expected to cost around $450 million, with much of the money coming from a combination of public and private partnerships.

In March, Ohio awarded the Centennial Project $40 million in tax credits to help make the renovation possible. The project will include a mix of commercial office spaces and affordable housing options.