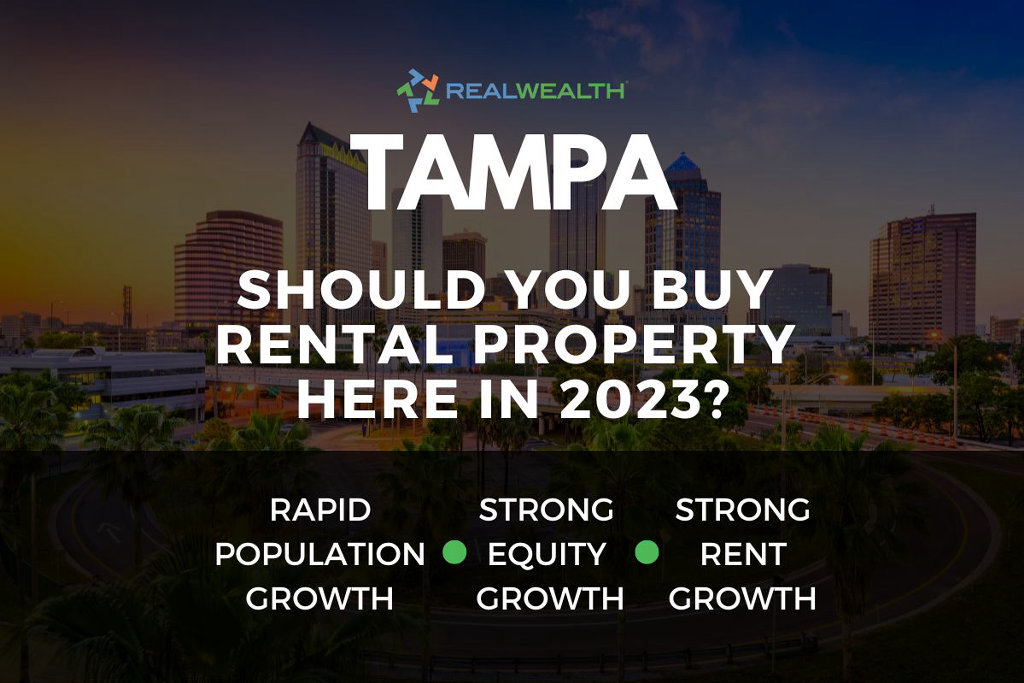 Tampa is a densely populated metropolitan area in west central Florida, with a population of more than three million people. With its attractive location on the Gulf Coast and a strong economy, Tampa has everything millennials want: financial services, STEM-related occupations, health care, research, education and tourism.

Tampa is called the economic hub of West Central Florida. The local economy is worth 160 billion dollars with the largest seaport in Florida.

In addition to the weather (which includes warm winters), and all the attractions of old Tampa itself—including its own theme parks and proximity to Orlando—the sprawling Tampa Bay area offers plenty of opportunities. 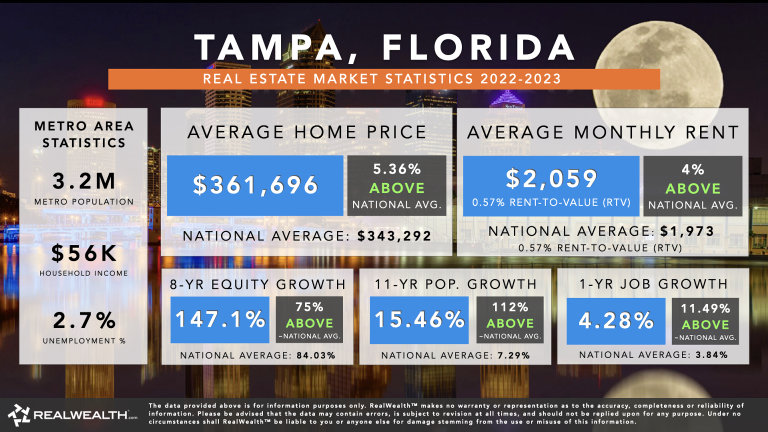 Tampa, Florida has been named the hottest housing market in the United States for 2022. According to a recent study by Zillow, Tampa outranked other Florida cities as well as major metros like Phoenix and Austin due to its number of potential buyers, scarcity of homes, home sales and flourishing job market.

This section will explore some of the factors that make Tampa one of the strongest real estate markets today, including job growth, population growth and affordability. 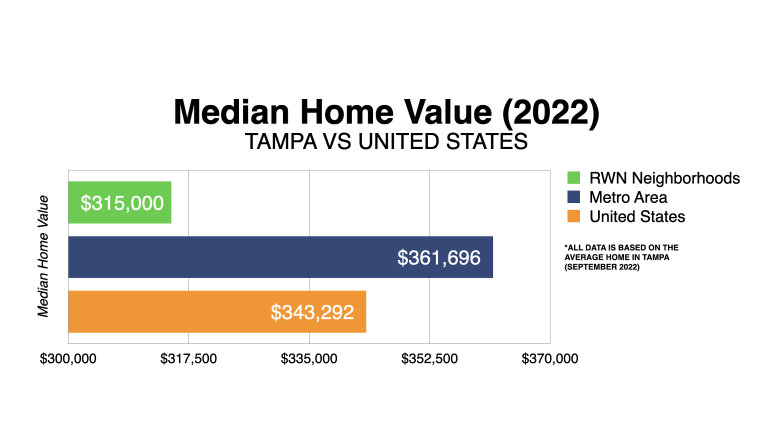 Even though Tampa is one of the many housing markets that have seen double-digit price jumps year over year, there are still opportunities to find good deals if you know where to look.

The Tampa market is very competitive. The Redfin Compete score for Tampa is 72 and homes there typically receive 3 offers and sell in around 18 days on average. 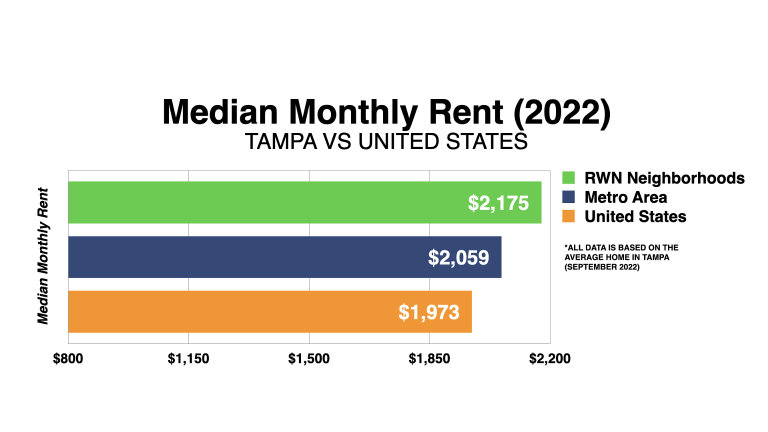 In neighborhoods where Realwealth Investments members invest, the average monthly rent is $2,175—that’s 10.24% above the national average.

The Tampa metro area has a rent to value ratio of 0.57% and a price to rent ratio of 14.6. The rent-to-value ratio in Tampa is equal to the average RTV ratio in the United States. But in neighborhoods where RealWealth members invest, the RTV ratio is 0.69%, 21% greater than the US average.

51% of Tampa’s households rent their homes. This creates a lot of demand for rental properties—and plenty of opportunities for investors. 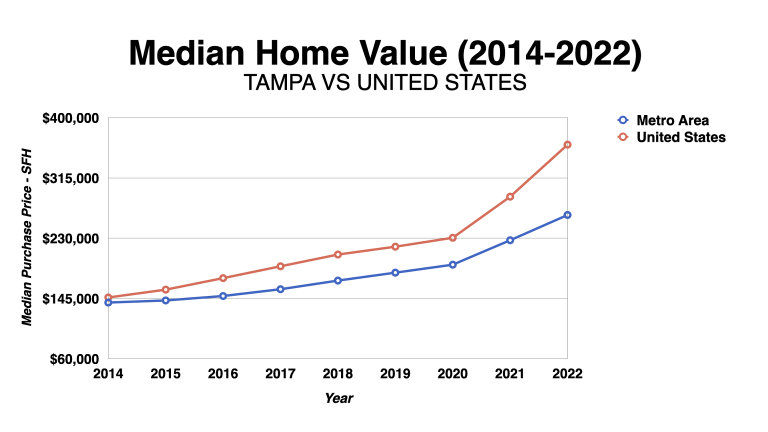 In fact, in the past 8 years, real estate prices have increased by 13.79% every year. Downtown Tampa, MacDill Air Force Base and Ridgewood Park have been some of the top-performing neighborhoods in Tampa over the past two decades.

In May 2022, Zillow reported that Tampa had the second-highest yearly price increases of any major metro area in the country. According to the report, “The hottest annual appreciation among the 50 largest U.S. metros can be seen in Raleigh (37.3%), Tampa (36.5%), and Orlando (33,4%)”. 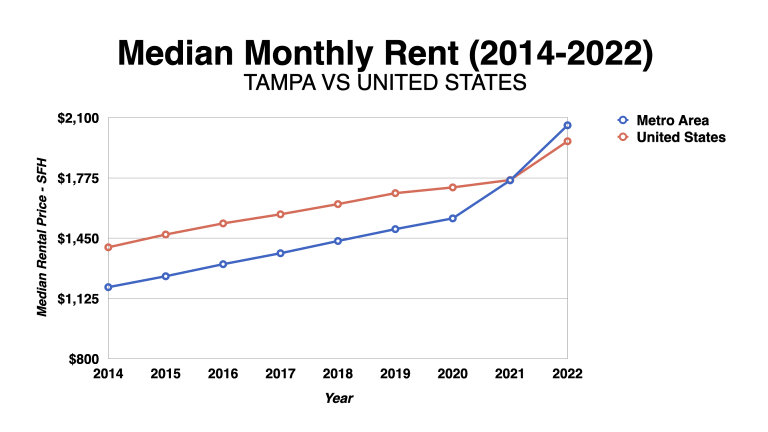 Tampa rent prices have increased by a total of 73.61% over the past eight years. That’s 80.11% greater than the national rent price appreciation rate over the same time period.

Rent prices in Tampa have increased by 8.2% per year for the past eight years.

The Tampa rental market benefits from the fact that Tampa is one of the fastest growing cities in the U.S., with its population growth rate well exceeding that of other major cities in Florida and across America. 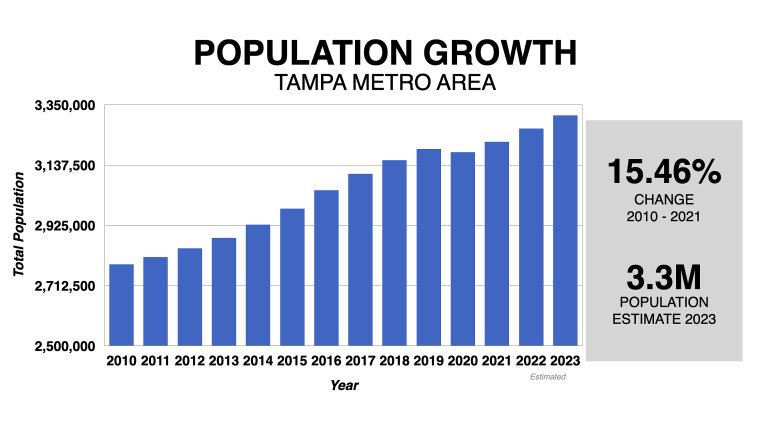 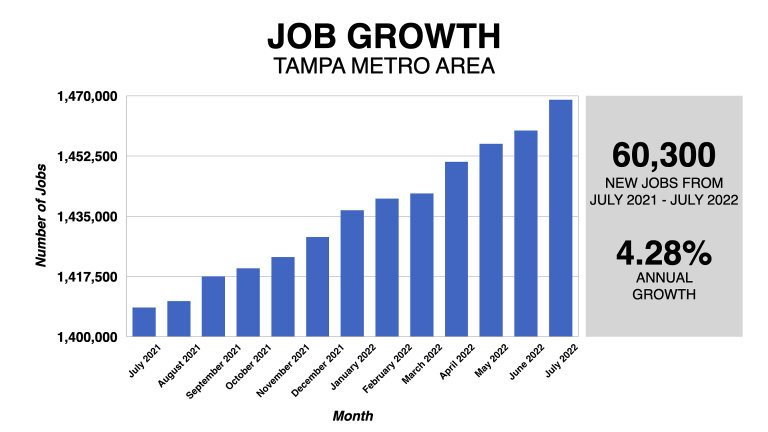 Tampa is one of Florida’s most populous cities and the largest in the Tampa Bay Area. It’s also a hub for employment opportunities, with a steady stream of jobs flowing into the region each year.

The Gross Domestic Product (GDP) of the Tampa-St. Petersburg-Clearwater metropolitan area is more than $169 billion, according to a report from the Federal Reserve Bank of St. Louis. That’s an increase of nearly 46% in 10 years.

According to Redfin, Tampa was among the top places people are moving to in 2022. Between 2010 and 2021, Tampa’s metro area population grew by nearly 16%.

Since the mid-2010s, Tampa’s job market has been growing steadily, attracting many new residents from outside the state. In the last five years, 76 percent, or 109,978, of the 144,156 domestic in-migrants to the HMA relocated from outside of the state of Florida.

The HUD forecasts that in the next three years, population growth will average 48,550 persons annually—a 1.5 percent increase—with net in-migration increasing as economic conditions in the HMA strengthen. This isn’t far fetched as the average annual population growth over the last 11 years has been 1.45%.

Central Florida is home to more than 8 million residents and over 60 million visitors annually. It is the fastest growing region in the state and is expected to outpace growth in south Florida by more than 2 to 1 for several years.

The Port of Tampa Bay continues to provide superior supply chain efficiencies to importers and exporters in the region, making it a hot spot for industrial real estate.

Tampa and Orlando are about 85 miles apart and can be traveled by car in one hour twenty minutes. This proximity means that Tampa residents have a short drive to some of Orlando’s top tourist spots and easy access to the numerous restaurants and shops in Downtown Disney. The Orlando airport which serves over 40 million passengers a year is also easily accessible.

In the past 8 years, Tampa home values have increased by a total of 147%. According to the S&P CoreLogic Case-Shiller Index, Tampa Bay experienced some of the biggest price jumps in the country, with a 34.8% increase in home prices from 2021 to 2022.

Tampa Bay is a fast-growing tech hub, and the area’s skilled talent pool is one of the biggest reasons why. According to Chmura JobsEQ, the region has the second largest IT employment in the state and a location quotient of .90, which is significantly higher than Florida as a whole (.77) and Miami (.63), which has the largest total employment count.

The hot housing market is driving demand for rental properties in the Tampa metropolitan area.

On average, Tampa rents have increased by 73.61% over the last 8 years. This is 80.11% greater than the national average increase during the same period.

The rent-to-value ratio is a quick and easy way to determine whether a particular rental market is overvalued or undervalued from an investment perspective.

Buy-and-hold investors often use the “1% Rule” or “2% Rule” as part of their purchase criteria—but in today’s rental market, that might prove to be too high a hurdle for even the most patient investor. As a result, investors want to buy properties that meet 0.7% (i.e. the ratio of rent to sales price is 0.7% or more).

Tampa’s rent-to-value ratio is equal to the US average (0.57), but in neighborhoods where Realwealth members invest, the RTV ratio is 0.69%. This is 21% greater than the US average.

Tampa’s economy is booming. According to the Federal Reserve Bank of St. Louis, the Tampa MSA’s GDP is more than $169 billion. In the last decade, its economy has grown by nearly 46%. A total of 20 companies, including 7 Fortune 500 companies, have their corporate headquarters in Tampa Bay. Each of these companies generates annual revenues of over $1 billion.

Rome Yard is a joint venture between the Tampa Housing Authority, the City of Tampa, and Related Urban Development Group. It covers about 18 acres and will be a pedestrian-friendly neighborhood integrated with multiple modes of public transportation, including a Workforce Training Center, a Cultural Center and an Art Pavilion highlighting West Tampa’s history.

The mixed-use redevelopment will be home to 17,000 square feet of commercial space, a job training center, and over 30,000 square feet of amenity spaces. Rome Yard will consist of 954 residential units—600 of which will be for workforce housing and affordable housing—and 354 units will be market-rate apartments and townhouses.

The Gas Worx development will be the first transit-oriented mixed-use development in Tampa.

This new project will be located near Channelside Bay Plaza, which is a shopping mall with a hotel and office space. The Gas Worx project will include 500 residential units, 40,000 square feet of grocery space and 20,000+ square feet of commercial space.

The Westshore Marina District is a master-planned community overlooking one of the largest yacht basins on Tampa Bay. Located in the heart of Tampa Bay and with direct access to downtown Tampa and downtown St. Petersburg, which are 6 miles east and 10 miles west, respectively.

The Westshore Marina District will have marina landings and retail space that can accommodate yachts up to 100 feet in length. The development will also be home to residential units, office space, hotels, restaurants and retail stores designed for both residents and visitors alike. This 52-acre development will be completed by 2025.

The $3.5 billion Water Street Tampa development began construction in 2018, and Phase One will be complete by 2022. The 56-acre, multibillion-dollar development will double the size of downtown Tampa and will be a showcase for sustainable urban waterfront design.

The Heights is a 2.5 million square foot urban redevelopment project on the West Coast of Florida. The community will be built around the theme of “live and learn, play and earn” to create a true mixed-use urban neighborhood.

PLACE Architecture, along with James A. Moore, developed a masterplan for this 14-block community that is located along the Hillsborough River just north of downtown Tampa. The development will be adjacent to Water Works Park and will be connected to downtown Tampa by the last phase of the Riverwalk, a project still under construction.

The Heights will include 300,000 square feet of office space, 200,000 sq. ft retail space, and over 1,500 residential units across several buildings, plus a one-quarter mile extension of the Riverwalk project. The Heights will also include outdoor spaces such as courtyards where residents can gather together or host events like concerts or festivals.