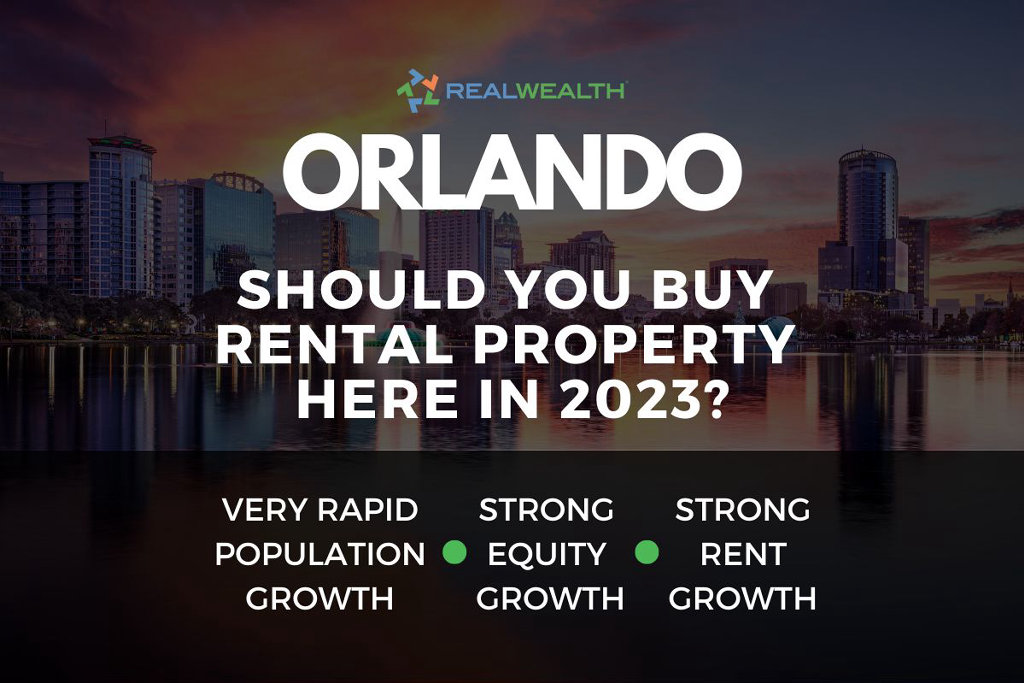 Interested in investing in the Orlando real estate market in 2021? On this page you’ll learn about the housing market forecast, trends and statistics to help you make that decision.

Orlando is Florida’s fourth largest city and the 73rd largest in the United States. With an average of 51 million tourists visiting each year and a population density of 2,327 people per square mile, Orlando is a mix of both tourist attractions and residential housing.

Major attractions and resorts such as Disney World Resort and facilities such as the Kennedy Center create a constant demand for workers in the Orlando area. Orlando was ranked one of the 15 Best Big Cities for Jobs in a 2018 Forbes ranking of the best cities for job seekers.

The population of Orlando has grown at a rapid rate over the past five years. Greater Orlando, which currently has a population of 2.69 million people, will see its number rise to over 5.2 million by the year 2030 according to experts.

Students, retirees, and people who move to Orlando to find jobs are all increasing the demand for housing in the city. This increased demand creates favorable opportunities for real estate investing. 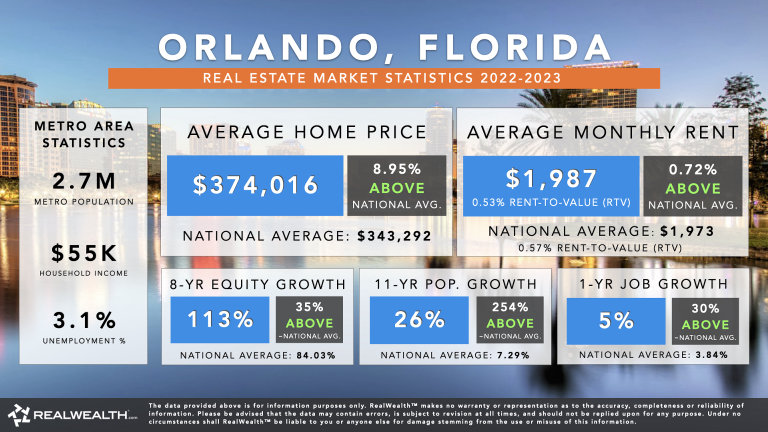 Orlando, located in the state of Florida, has been a popular tourist destination for decades. With so many tourists visiting the area each year and a growing number of residents choosing Orlando as their home base, it’s no surprise that Orlando is one of the strongest real estate markets in 2022 and into 2023.

Orlando is home to a number of successful companies and large-scale enterprises that bring both job opportunities and ongoing investment to the area. An estimated 500 people move to Orlando every week, making it the third fastest growing city in America.

Here, we’ll explore the top factors that make Orlando one of the strongest real estate markets of 2023, including job growth, population growth, and equity growth potential. Learn more about Orlando’s housing market, population trends, and employment numbers in the tabs shown above! 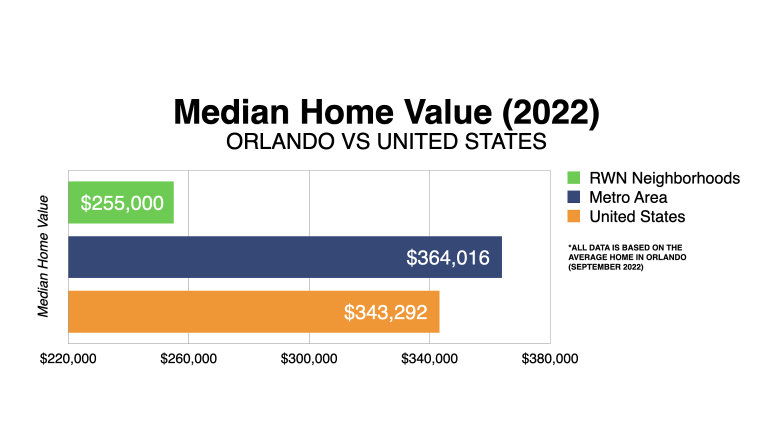 In places where RealWealth investors invest, homes cost an average of $255,000. This is 26% less than the US average.

The Orlando housing market is highly competitive, with a Redfin Compete score of 72 out of 100. 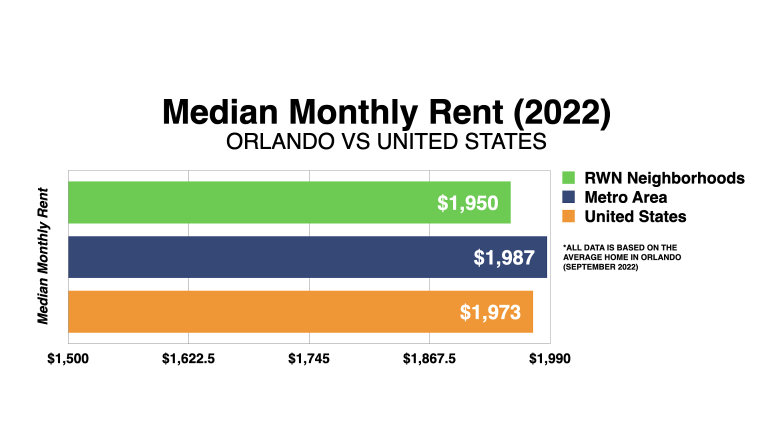 The average rent for single-family homes and apartments in Orlando in 2022 is $1,987. This is almost equal to the national average of $1,973.

The rent-to-price ratio in Orlando is 16, which suggests that renting is a better deal than buying. Thus it is not surprising that 63% of Orlando residents rent their homes. 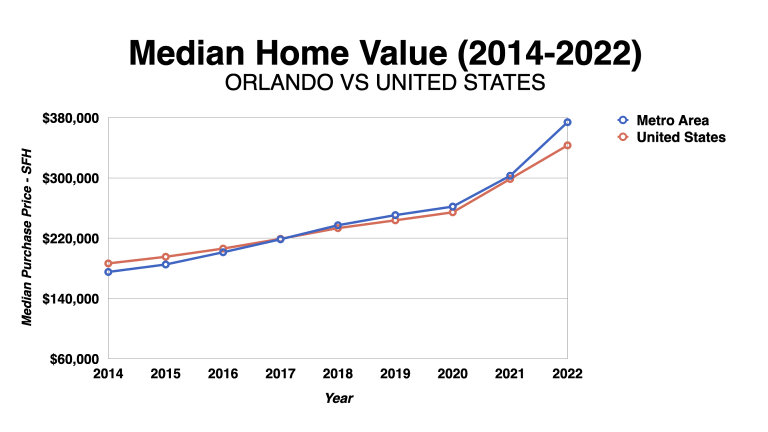 Orlando real estate prices have been growing at an average annual rate of 11.44% since 2014. 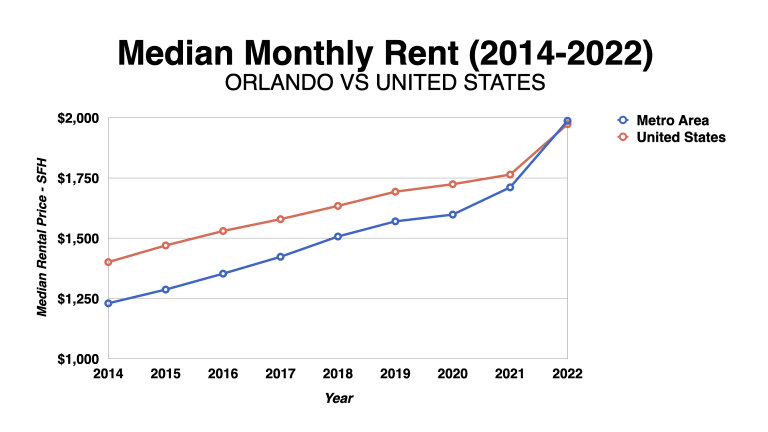 The rent appreciation rate in Orlando has been much slower than home equity growth, but it still outpaces US rent growth by almost 51%. From 2014 to 2022, average rent in Orlando increased by almost 62% while the average US rent price increased by 41% during the same period.

From 2014 to 2022, the average rent prices in Orlando grew by 7.10% per year. And there are no signs of a slowdown as the population of Orlando continues to increase. 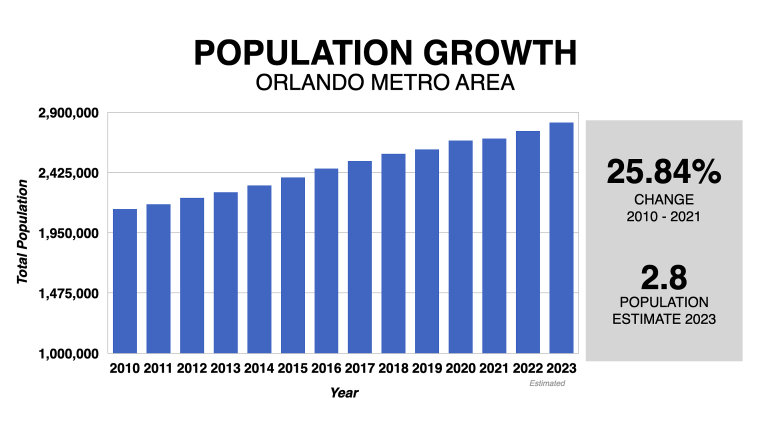 During this time, Orlando’s population grew 254% faster than the national average. The Orlando metro area’s growth rate of 2.33% puts it third among the fastest growing U.S. metropolitan areas.

The Orlando Economic Partnership predicts the Orlando region will gain 1,500 new people per week until 2030, when its population reaches 5.2 million people. 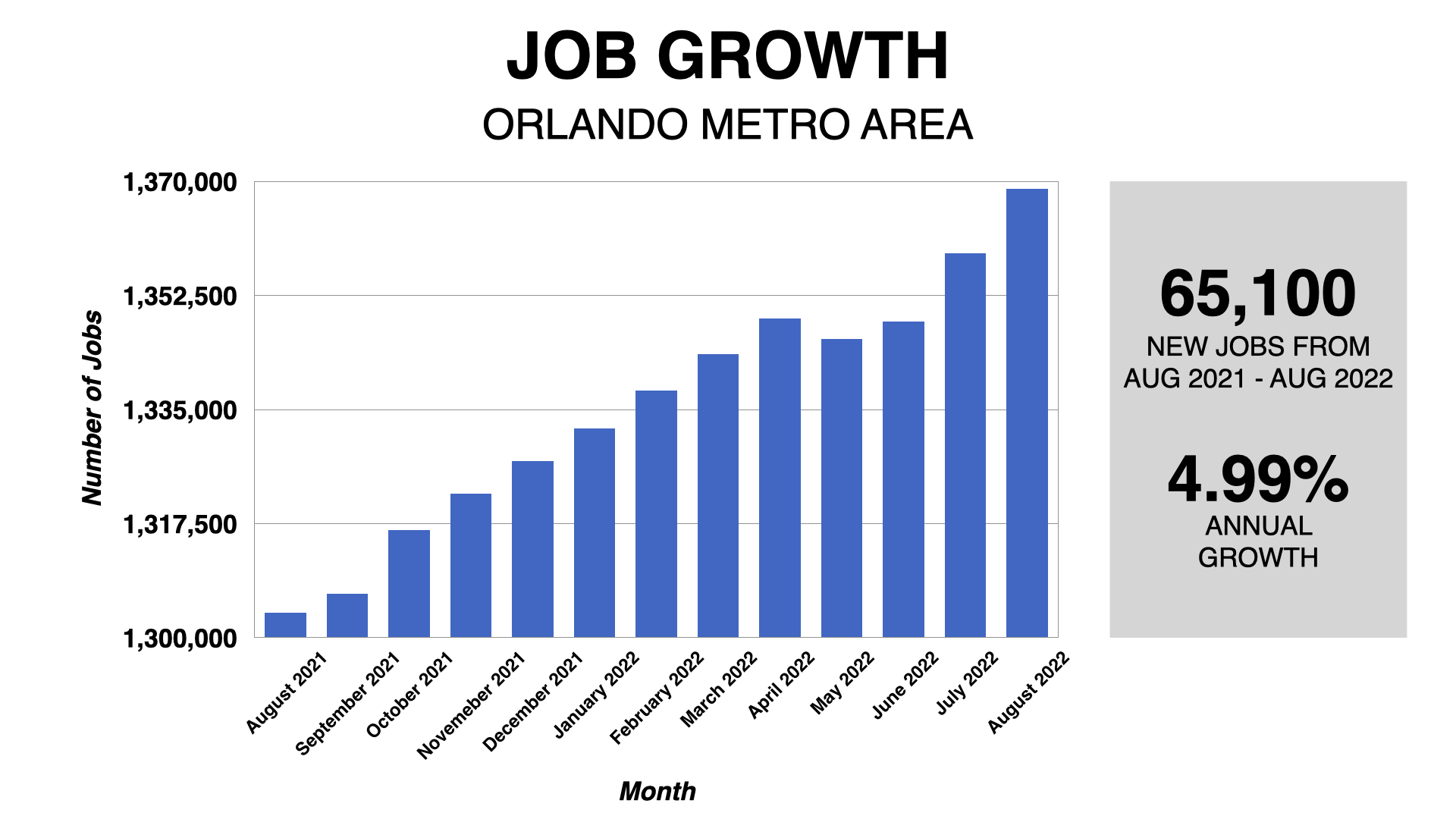 Orlando has seen a huge economic boom in recent years. The city had an unemployment rate of 2.9% in August 2022, compared to the national average of 3.7%.

The leisure and hospitality industry added the most jobs over the past year, followed by professional and business services, trade, transportation, and utilities.

Orlando’s metro area has been growing at a rate of 2.33% per year, making it the third fastest growing metro area in the US. In addition to this population growth rate, Orlando has also seen an increase in job seekers and college students from all over the country—and even from abroad.

In the Orlando-Kissimmee-Sanford metro area of Florida, the population is expected to exceed 4.8 million by 2060. Orlando’s 75.3% projected growth rate is the 15th highest in the nation.

Orlando is a popular destination for investors because the job market is strong, and the economy is vibrant.

The Orlando, Florida area is expected to see a 19% increase in industry employment by 2030, a 10% increase over the national average.

Orlando is also a hot rental market. Since 2014, Orlando’s rent prices have increased annually by 7.10%.

When it comes to buying rental properties, investors generally look for properties that have a monthly rent to value (RTV) ratio of 1%. For example, at a sales price of $120,000, a $1200 per month rental would be considered ideal.

With double digit home equity gains across the US, most investors will opt for investments that deliver RTVs of 0.7% or higher.

The average rent to value (RTV) ratio for neighborhoods where members of RealWealth invest in Orlando is 0.76%, 34% above the national average.

And the demand for rental properties in Orlando is high as 63% of households currently rent their homes.

Orlando has a booming economy and has been able to position itself as one of the fastest-growing areas in the country by fostering niche industries beyond its traditional strengths in tourism and hospitality.

Orlando is one of the most visited cities in the world, drawing millions of tourists every year. As a result, tourism is one of Orlando’s main economic forces.

Behind the scenes, the area’s economy is dynamic and diverse. It includes high technology, aviation and aerospace, film and television production, biotechnology and manufacturing.

Metro Orlando is one of the world’s few quadramodal transportation centers—a global shipping hub in central Florida. It is home to Orlando International Airport, which offers non-stop service to 72 cities. It is the largest and busiest airport in Florida, the 15th largest in the United States and 23rd largest in the world.

Orlando is home to a variety of attractions, including exciting nightlife and natural beauty in the form of lakes. Transportation is convenient and reliable, making it easy to get around town or take a trip to visit friends in another city.

Living in Orlando is 3% more expensive than the national average, but incomes are higher as well—if you earn $80,000 in the United States, your comparable income in Orlando would be $82,560.

Creative Village was first conceptualized by the Orlando Economic Partnership as a way to transform Downtown Orlando into a mixed-use neighborhood that would support innovation, entrepreneurship and the digital media industry.

389 North is a 39-story high rise located on Weintraub’s property at 389 N Orange Ave at the corner of S Orange Avenue and E Livingston Street in downtown Orlando.

A 7,500 square foot rooftop lounge and amenity deck will also be part of the development.

Construction of Modera Baldwin Park, a $50 million residential development slated for Orange County, Florida, could begin by the end of 2022.

As of June 2022, the city of Orlando was reviewing the application and was expected to approve it. If approved, the venture could deliver 400 luxury homes in an eight-story building.

MCRT Investments LLC, a real estate investment firm based in Washington D.C., owns the venture and has developed two other communities in Orlando: Modera Creative Village and Modera Central.

Some sources claim that construction work on Modera Baldwin Park could begin in November 2022.

The Church Street Plaza development, located at 225 South Garland Avenue, is currently in phase 2 of construction. The second phase will include 19 residential units that could be used as hotel rooms, 210,500 square feet of office space, and an integrated SunRail station.

The Bainbridge Companies, a luxury multifamily developer, plans to build more than 800 apartment units on 41 acres of property in Orlando’s tourism district. The $100 million complex will offer 397 housing units, with units spread across multiple five-story buildings. The project is slated to open in 2023.