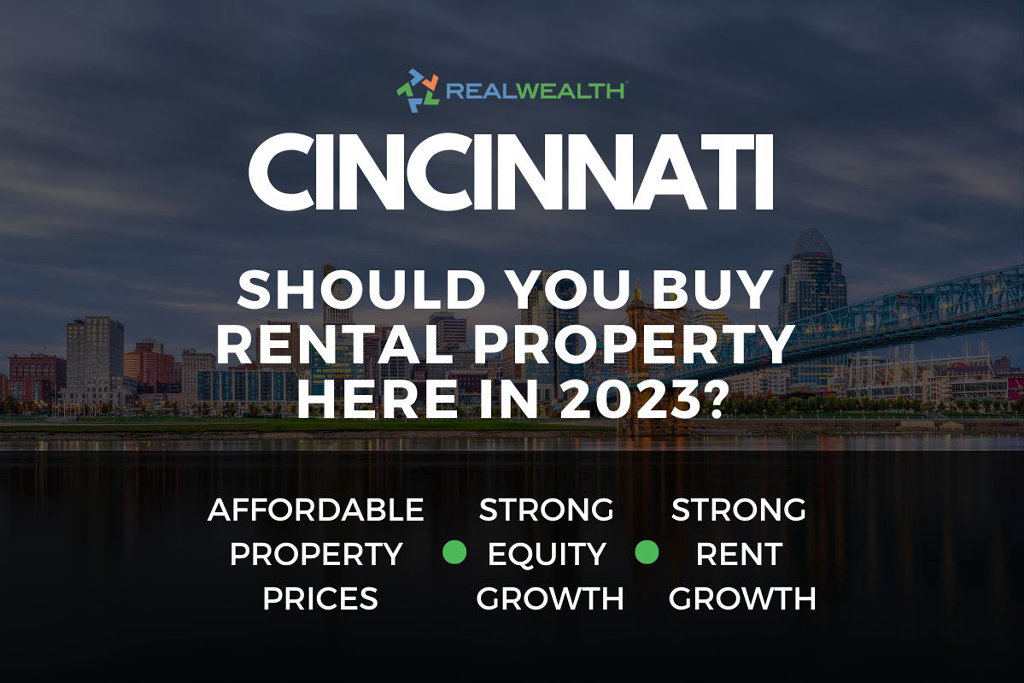 Known for its vibrant arts scene, acclaimed food spots, professional sports team, and chili, Cincinnati is the third-largest city in the state of Ohio and the 64th-largest in the country. It is located in Southwestern Ohio, on the northern side of the confluence of the Licking and Ohio rivers. For most of the 19th century, Cincinnati was one of the ten most populous cities in the United States, only surpassed by New Orleans and a few cities along the East Coast.

Affectionately nicknamed “The Queen City,” Cincinnati is the county seat of Hamilton County and the economic and cultural center of the Cincinnati metropolitan area. This area, also known as the Cincinnati Tri-State area, includes counties in the states of Ohio, Kentucky, and Indiana. It is the third-largest metropolitan area in Ohio and the 30th-largest in the country, with a population of 2,259,935 as of the 2021 census.

Cincinnati is home to several historical architectural projects, such as the Cincinnati Music Hall and the Taft Museum of Art, which has led to the city being described as “the Paris of America.” After the war, Cincinnati’s economy flourished as new markets opened up in the North and a new rail system connected the city with the South. For most of the 19th century, iron production was the most dominant industry in the city, followed by meatpacking and woodworking.

Cincinnati’s economic growth declined in the 20th century, but this was followed by a period of economic overhaul and revitalization. Today, the services industry (retail and wholesale trade, education, defense, and transportation) contributes the most to Cincinnati’s economy. The transportation industry is still growing today, due to the presence of one of the country’s biggest inland coal ports and an international airport. The real estate market is also one of the hottest in the nation, with lots of opportunities for investors. 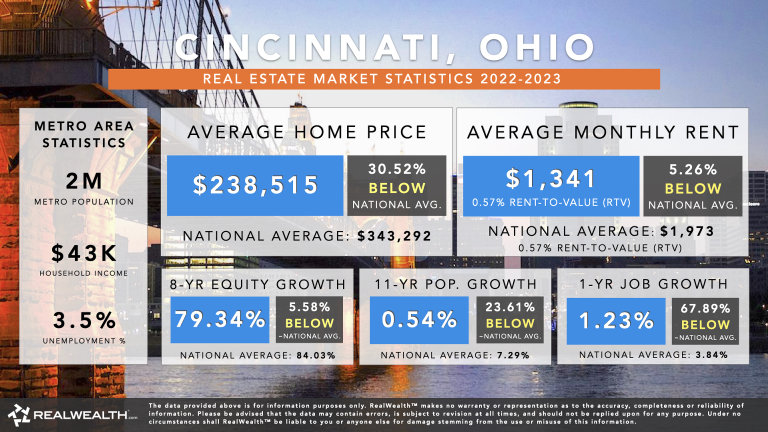 The Cincinnati metro area is a region that has an established record of consistent economic growth. It continues to grow, partly due to the abundant natural resources present in the region and the financial investments that have been made over the years. Residents enjoy diverse job opportunities from the different employers in the area. In 2019, Forbes ranked Cincinnati as number 44 on its list of the most promising places for businesses and careers in the United States.

Our goal in this section is to explore the various factors that make Cincinnati’s real estate market attractive to real estate investors, including home affordability, passive income generation potential, and job trends. You can learn about the housing market, population, and employment rates in Cincinnati by clicking on the tabs above. 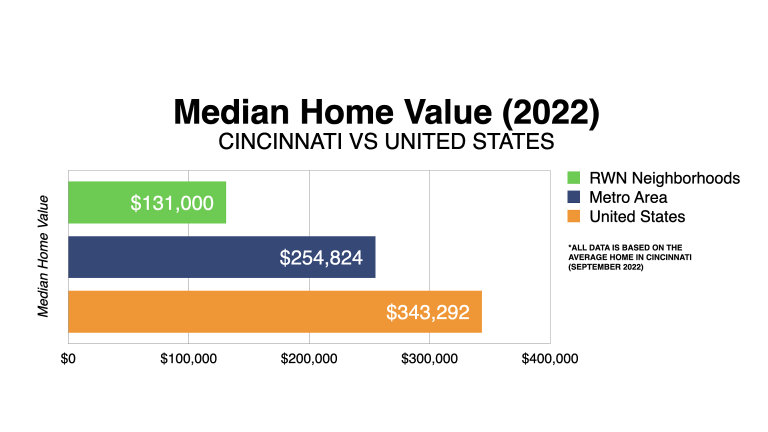 With home values rising, Cincinnati homes are still much less expensive than in most other parts of the country. The average home price in Cincinnati is $254,824, about 26% less than the national average. Cincinnati’s real estate market is more affordable than other comparable markets in the country.

The rent-to-value ratio is a very significant metric for real estate investors. It is the ratio of monthly rent charged to the property’s actual value and is used to determine the investment potential of the property. Cincinnati has an RV ratio of 0.54%, 5.26% lower than the average nationally. Higher rent-to-value ratios are considered ideal, with 0.7% being the sweet spot.

Homes in RealWealth neighborhoods in the Cincinnati area have an average price of $131,000 and a rent-to-value ratio of 0.95%, about 67% higher than the national average. 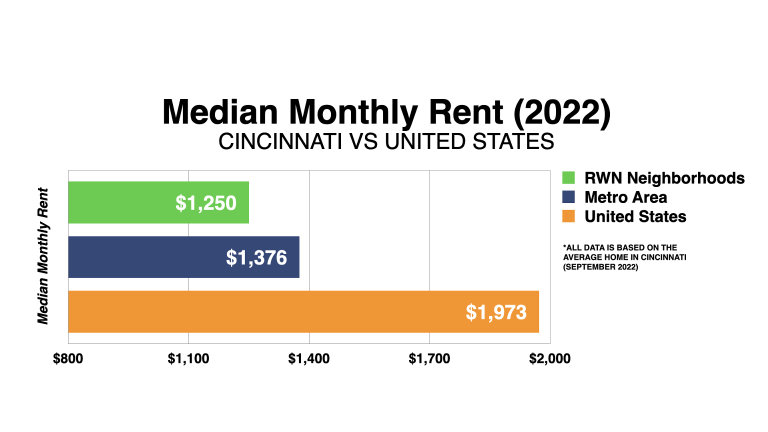 With a price-to-rent ratio of 15.4%, renting an apartment is slightly cheaper than owning one in Cincinnati. For this reason, 61% of homes in Cincinnati are occupied by renters.

The average rent for an apartment in Cincinnati is $1,376. This is 30% lower than the national average, meaning renters are more likely to get a good deal than in most other parts of the country. The demand for rental property is further expected to skyrocket due to the influx of workers looking to take advantage of job availability and better working conditions in Cincinnati. 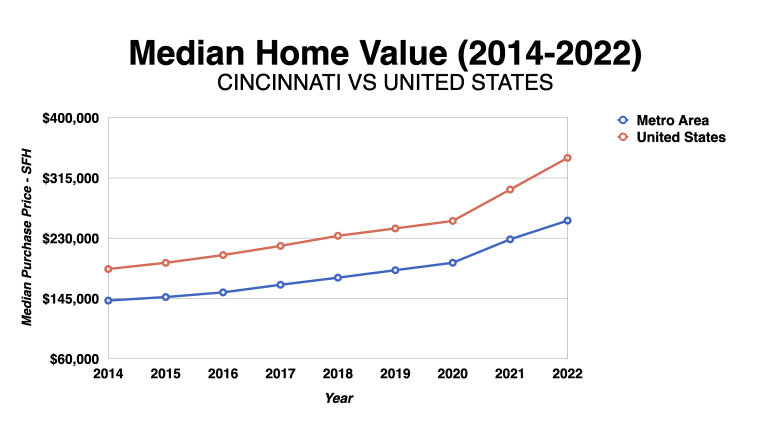 Cincinnati homes have appreciated significantly over the last ten years. Home values in the Cincinnati metro appreciated at an average annual rate of 8.7% between 2014 and 2020.

Based on RealWealth data, homes in the Cincinnati market have appreciated by 73.82% cumulatively from 2014. This amounts to an average yearly increase of 8.7%. Continuing demand for housing should lead to even higher property values over the next few years. This means that real estate investors are sure to get a fair return on investment from equity growth alone. 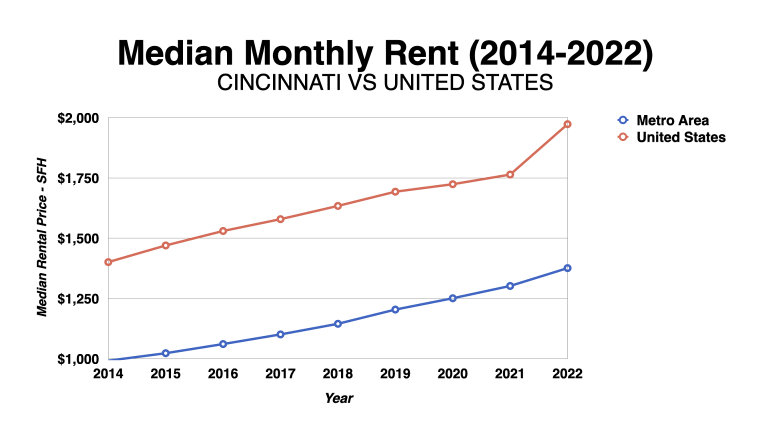 Rental prices are growing steadily in Cincinnati, but they are still much more affordable than the national median of $1,973.43. The affordable rental values coupled with the low cost of living make Cincinnati an attractive option for real estate investors. 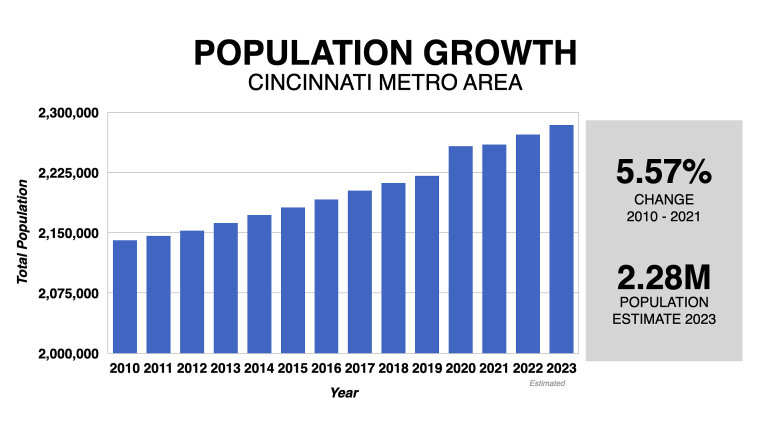 Cincinnati has experienced consistent population growth for the last ten years. Cincinnati’s pro-growth policies and the resurgence of its urban core are credited for this growth. The population of the city is estimated to be around 308,000 and the metro area houses some 2.25 million residents.

The population of Cincinnati increased by 5.57% from 2010 to 2021. During this period, the population grew by 0.54% annually, slower than the national average but still consistent.

In 2020, Cincinnati saw an unexpected increase in population after years of decline. The metro area, Greater Cincinnati, continues to grow steadily, a sure sign of a strong real estate market. If this trend continues, the population in Cincinnati will be 2,284,564 by 2023. 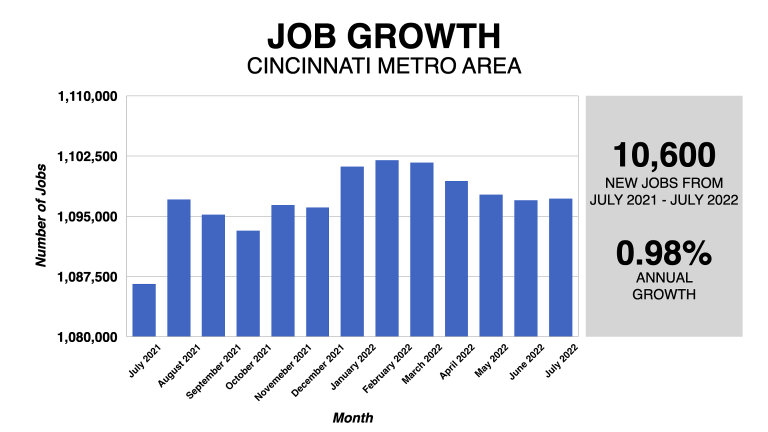 Although the job growth rate is much slower than the national average, Cincinnati’s economy is one of the few that actually fared comparatively well post-Covid. The metro’s economy shrunk by only 3.6% in the aftermath of the pandemic, due to its diversified economic base.

The Bureau of Labor Statistics reports an unemployment rate of 3.9% in the area, a sharp decrease from 4.8% last year. Greater Cincinnati’s abundance of high-paying jobs, low cost of living, and low unemployment rate make it an attractive place for inbound workers.

Cincinnati currently offers lots of interesting options for people looking for better opportunities. This trend is expected to continue and further drive up the demand for housing.

Cincinnati is not the fastest-growing metro area in the United States, but the population has grown at a steady pace over the years. Cincinnati has seen a 5.57% increase in the number of residents from 2010 to 2021. This rate of growth outpaces other metro areas, such as Cleveland-Akron, and Dayton-Springfield. With a population of over 2.26 million people, Greater Cincinnati remains the third-largest metro area in Ohio.

There is a high demand for housing in the Cincinnati market, which might explain the number of households that rent rather than own in the area. Inventory remains too low to meet the rising demand, which makes Cincinnati a seller’s market. Homes usually stay on the market for two days before going under contract and selling for much more than what they were listed for.

With Cincinnati’s population growth and attractive incentive programs, this housing demand trend is likely to continue.

Cincinnati home values have been steadily increasing over the past decade, at a yearly appreciation of 8.70%. An increase in inventory might slow down this growth a bit, but this upward trajectory is expected to continue for years to come.

Relative to other markets, Cincinnati home values are not rising rapidly. However, this steady appreciation rate is a great way for investors to maximize their investment without exposing themselves too much to market risk.

However, the competitive nature of the Cincinnati market means that finding affordable housing might not be as easy as it was some years ago. The experienced property teams Realwealth works with have a proven record of finding profitable properties for investors in Cincinnati.

Ranked one of the best places to live in the US

Cincinnati was ranked number 42 on a list of the top 100 best places to live in the US by Livability, the only Ohio city to make the list. The city was given a LivScore of 624, a ranking based on amenities, economy, demographics, healthcare, education, transportation, and other socio-economic factors.

According to Payscale, the overall cost of living in Cincinnati, Ohio is 8% below the national average. Migrants are sure to be attracted by the lower cost of groceries, healthcare, and housing promised by Cincinnati, driving up demand in the real estate market.

In the last decade, Cincinnati’s job growth has outpaced several regions such as Cleveland and Pittsburgh. According to a report by the Cincinnati Chamber, employment in the Cincinnati MSA is projected to increase by 6.2 percent from 2018-2028.

HaNoBe at Linden Square, formerly known as College Hill Station, is a new mixed-use development located at the northern end of the College Hill Business District. The $31 million project was the result of years of planning and extensive work by the City of Cincinnati and College Hill Community Urban Redevelopment Corporation (CHCURC).

The project includes 171 market-rate apartments, over 10,000 square feet of street-level retail, a 240-space parking lot, and streetscape improvements along Hamilton and North Bend. The completed project is expected to create about 22 new jobs.

The Foundry is a mixed-use development located in the heart of Over-the-Rhine, across the street from Fountain Square. The project is being managed by the Cincinnati Center City Development Corporation, or 3CDC, and is projected to cost a total of $51 million. It is set to bring new life to Downtown Cincinnati and will include 150,000 square feet of Class A office space, along with 35,000 square feet of street-level retail/restaurant space. The construction is expected to be completed this year.

Uptown Gateway is a 5.8 acres mixed-use development planned as part of the Uptown Innovation Corridor. The project will be located on the site of the former Gateway Theater, which was demolished in 2016. It will include apartments, retail space, and office space.

There will be an underground parking garage with up to 1,500 spaces and the University of Cincinnati’s digital futures building, along with a 180,000-square-foot building, and a 150-room Homewood Suites by Hilton hotel. This project is expected to cost more than $200 million to complete.

The 4th & Vine Tower, formerly known as Union Central Tower, was the fifth-largest building in the world at the time of its completion in 1913. The skyscraper is being redeveloped and repurposed into a mixed-use development, including 281 luxury apartments and commercial uses such as a bank, a salon, office space, and different restaurants.

This project is a highly anticipated development in the new Madisonville urban core and business district and is one of the biggest investments in the area in recent years. Among other luxury amenities, the 104-unit project will have an indoor bicycle storage room and a fitness and yoga center. The third and final phase of the project began in 2021.