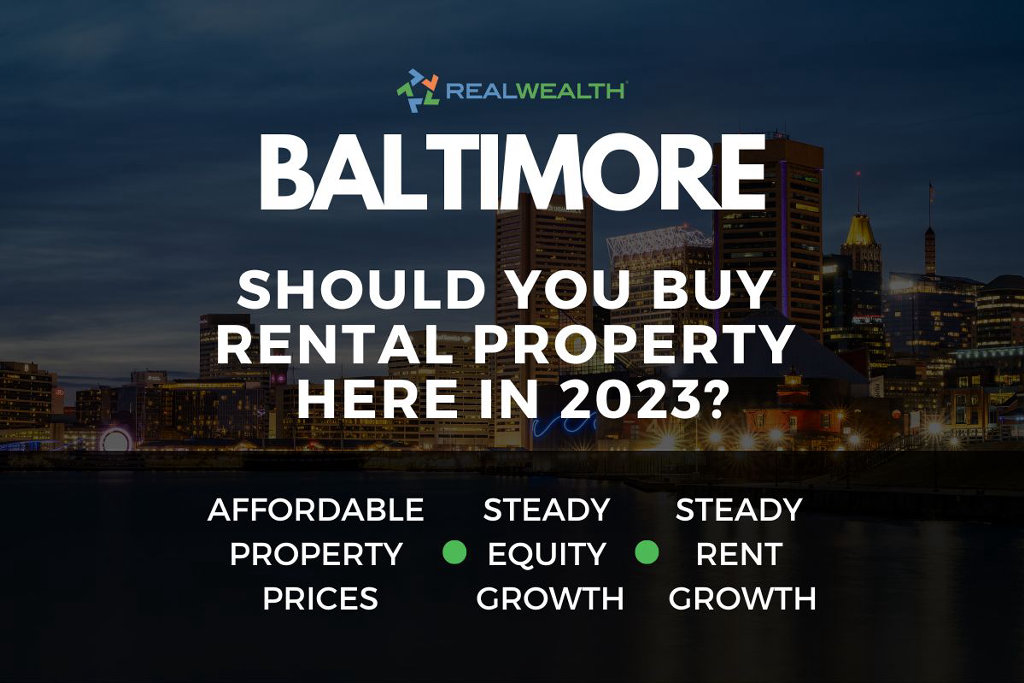 Interested in investing in the Baltimore real estate market in 2022 or 2023? On this page you’ll learn about housing market trends and statistics to help you make that decision.

Baltimore is a major city and an important economic center in the state of Maryland. It is closely linked to Washington, D.C., which lies just across the Potomac River to its south. Built on a foundation of transportation, Baltimore boasts an international airport, numerous rail systems, and an intricate series of tunnels and highways that connect the city to all points Northeast. Baltimore has been called many names: Charm City, the City that Reads, the Monumental City, and the City that Believes. The city is home to 12 colleges and universities, including renowned institutions such as Johns Hopkins University and Loyola University. This provides an abundance of intellectual and workforce talent for businesses in Baltimore. 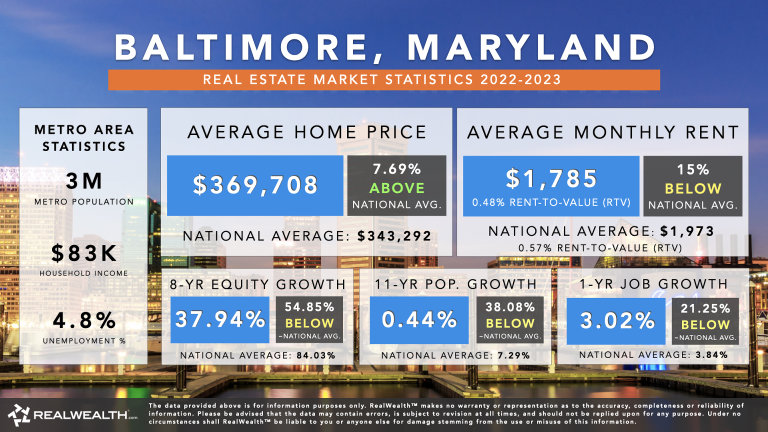 As the home of the nation’s number-one roll-on/roll-off port and an enormous duty-free zone, Baltimore is a major transportation hub with excellent public transit options and a major international airport close to downtown. In this section, we’ll explore Baltimore’s housing market, population and employment trends. We’ll also examine its affordability, monthly rental income, and equity growth potential. The tabs will give you a more in-depth look at these topics. 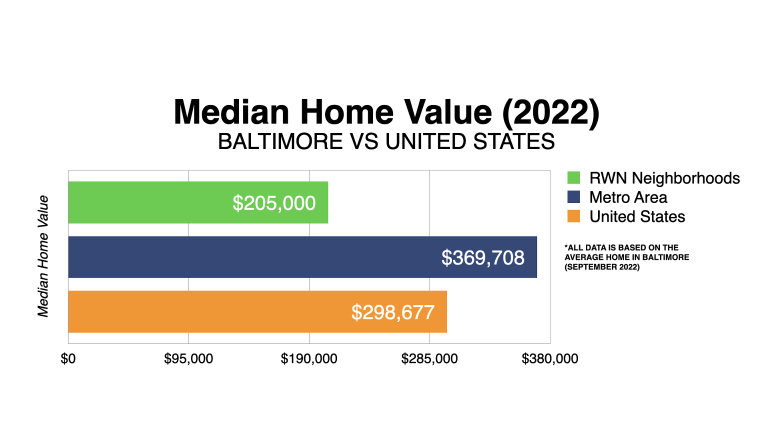 The median home value in Baltimore is $369,708. This is 8% higher than the national average for this year.

The average rent in Baltimore is $1,785 and the average price-to-rent ratio is 17.3. This is an important metric for people who live in Baltimore. If the score is below 15, it’s a good indication that now is the time to buy, if you can. If the ratio is above 21, it’s a sign that a market is way overpriced and renting makes more sense. Scores between 15 and 20 are the sweet spot between for people that live in the market and those who are considering an investment.

The rent-to-value ratio, also known as RTV, is a more common metric used by investors. You’ve likely heard of the 1% rule, but in today’s market it’s almost impossible to find deals at or above 1%. In the Baltimore metro, the average RTV in 2022 is 0.48%. However, the average RTV in Baltimore neighborhoods where RealWealth members invest is 0.94%. This shows that there are a lot of good deals to be found in Baltimore if you know where to look! 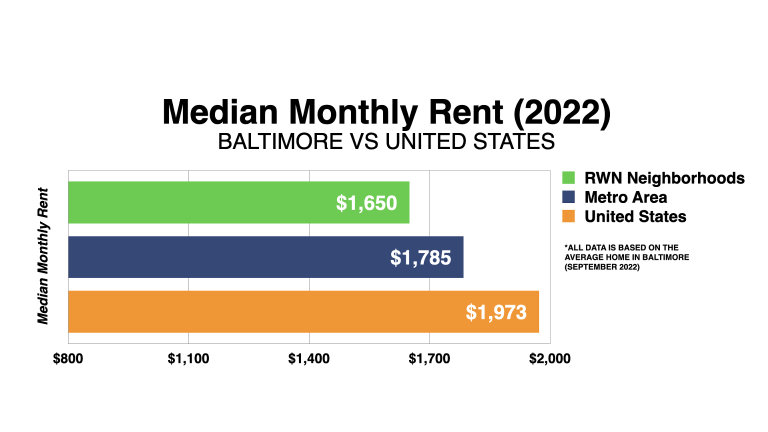 51% of households in Baltimore are renter occupied, which is higher than the national average of 36% for renter-occupied housing.

Annual rent increases have never gone above 3% in Baltimore, making it one of the few cities where rents are still affordable (and there are many distressed properties for sale). 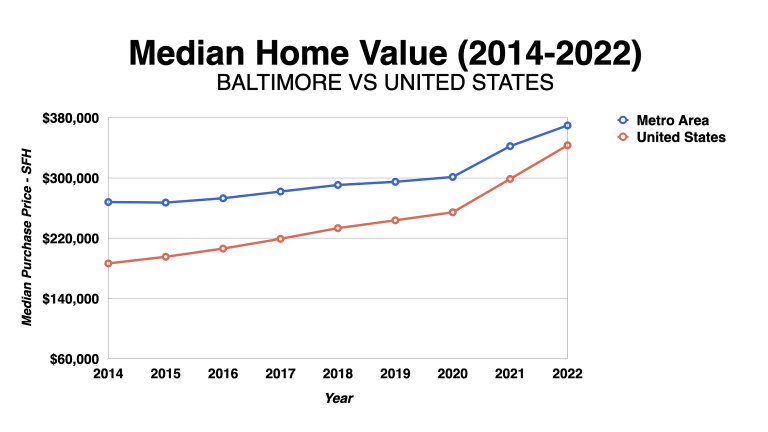 From 2014 to 2022, the median home value appreciation rate in Baltimore has been just under 5% per year compared to 9% for the national average. However, Baltimore’s home prices have appreciated by double digits since 2014 – a total of 16.6%. Although this is below the national average, rent growth of this magnitude is still a really good sign for investors.

One of the reasons for this is an imbalance of housing inventory relative to demand. In a balanced real estate market, there should be six to seven months of supply; however as of July 2022, Baltimore had only 2.4 months’ supply available—an increase by 12 percent year-on-year from 2.2 months in 2021. 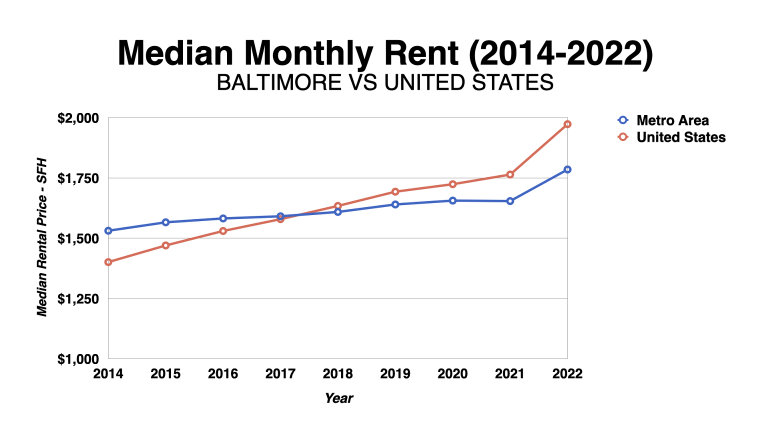 In the past eight years, Baltimore’s rent price has increased 17%, which is 59% lower than the 41% increase in national rent prices over the same period.

Last year, Greater Baltimore experienced its largest increase in rent since 2011. Rents increased by 7.9% between July 2021 and July 2022. This growth may be due to increasing demand for apartments in Baltimore and its surrounding areas. In the first quarter of 2021, according to RealPage’s data, Greater Baltimore ranked 15th among 50 U.S. Metro areas for the biggest growth in occupied apartments with a jump of 121.7%. 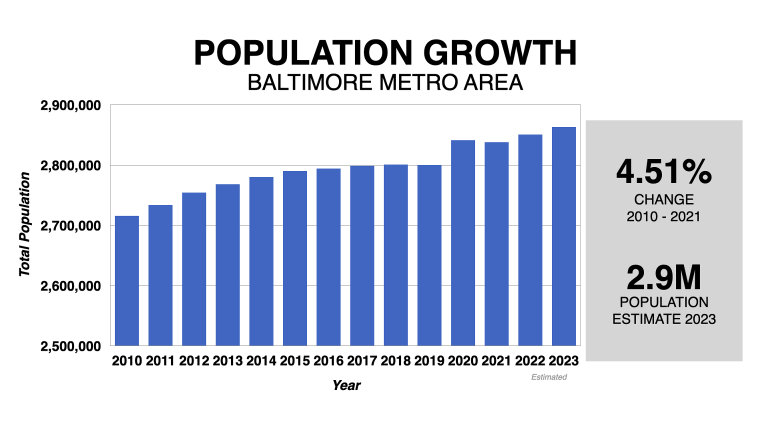 Baltimore is a city with a long and storied history. The city has experienced ups and downs, but it is currently undergoing something of a renaissance.

However, Baltimore has a high concentration of wealthy residents. The median household income in Baltimore in 2022 is $83,160 compared to $67,500 nationally. 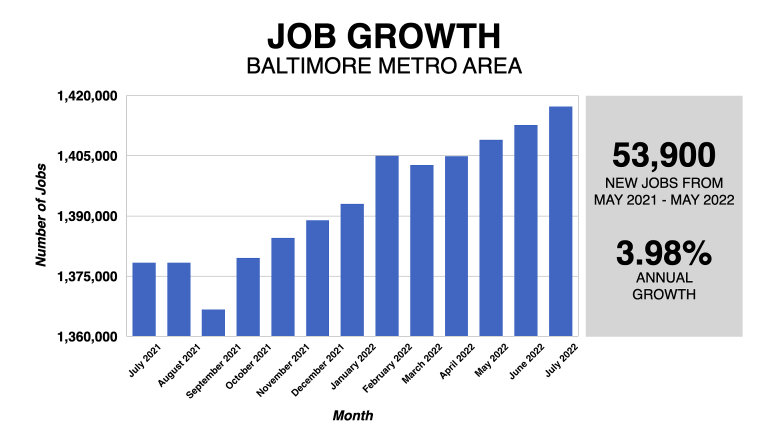 Between May 2021 and May 2022, Baltimore created 53,900 new jobs. This was a growth rate of 3.98 percent, which was 3.59 percent greater than the national average job growth rate of 3.84 percent. However, Baltimore’s unemployment rate in 2022 is 4.8%, compared to the national average of 3.9%. As of June 2021, Baltimore’s labor force had declined 3.6 percent and there was a 1.6-percent decline in resident employment. So the stats indicate that the local economy is recovering from recessionary trends. The government, education and health services employ 50% of Baltimore City’s workers.

Centrally located between Washington and Philadelphia

The Baltimore Pike is a major highway connecting Philadelphia and Baltimore. The road is named after the city of Baltimore, which lies along its route between Philadelphia and Washington, D.C. It is one of the oldest roads in continuous use in the United States. It was originally constructed to connect many of the most prominent cities along early America’s east coast.

Baltimore’s proximity to Washington and Philadelphia helps keep demand for real estate strong in Baltimore. The cost of living in Baltimore is also 11.8% lower than the U.S. average

And it’s not just about Amazon setting up massive fulfillment centers in the area—the city itself has been making significant strides toward revitalization. Old abandoned industrial buildings are being torn down to open up large construction sites—and tax breaks are available for new construction.

In the past year, home prices in Baltimore appreciated by more than 16% YOY. This is due to low housing inventory and a growing population of young professionals.

However, in Baltimore, where foundations, plumbing, roofing, and electrical wiring are more likely to be compromised by age-related wear and tear, home sellers have to inform buyers of any defects they know about. These disclosures can be made as part of the purchase contract or by providing buyers with an Addendum.

Baltimore has a lot of historic buildings. But as many as 17,000 homes in the city are vacant.

The City of Baltimore has a low threshold for foreclosing on properties. In Baltimore City, if you are delinquent on $750 in property taxes (or other municipal liens, including water bills), your house could be placed in a tax sale. This presents opportunities for investors who are interested in buying distressed properties.

Home to a number of famed colleges and universities

Baltimore is home to some of the best colleges and universities in the country. In fact, Baltimore has one of the largest student populations in Maryland.

Baltimore has a strong rental market. 51% of Baltimore households are renter-occupied. Although rents in Baltimore rose by 7% over the past year, the city remains one of the most affordable cities in the country for renters. There are many opportunities here for people who want to invest, or who are looking to expand their rental portfolio.

Today, Port Covington is one of the largest urban revitalization projects underway in the world right now. Phase One is set on 60 acres of the 235-acre Cromwell Street site south of I-95 with plans for up to 14 million square feet of shops, restaurants and office space as well as 40 acres of parks.

Port Covington has become a hub for cybersecurity firms; DataTribe, Evergreen Advisers and AllegisCyber all moved to the area in 2021.

The Madison Park North redevelopment project is moving forward with a revised design that will include two mixed-use buildings, a grocery store, office space for nonprofits, and 200 apartment units. The city has also pledged $1 million to improve public streets and sidewalks along North Avenue.

In addition to the private redevelopment, Ryan Homes will build a total of 120 townhouses during the first phase, which are expected to sell for around $350,000 each. Phase two will include apartments and commercial space, including a grocery store. Completion of all phases is expected by 2025.

Terra Nova Ventures, known for its adaptive re-use of historic properties, has taken on another project to preserve a historic building.

The plan is to convert the Ellicott Mill building into 190 apartments, a destination restaurant, some retail and a historic display site.

The Baltimore Arena, formerly known as Royal Farms Arena, is a multi-purpose indoor venue that hosts sports and entertainment events. The stadium is being renovated at a cost of $150 million, to include overhauled concourses, 30 to 40 new suites, upgraded concessions, and exterior glass walls, as well as enough seating to accommodate up to 15,000 guests.

In the future, Baltimore’s Warner Street District will be a focal point for downtown entertainment, thanks to new plans that will transform the area into an energetic and walkable corridor.

Developers plan to build a 4,000-seat concert hall called The Paramount and add an outdoor version of Hammerjacks, a storied Baltimore nightclub and concert hall. The project will also include retail space and restaurants. 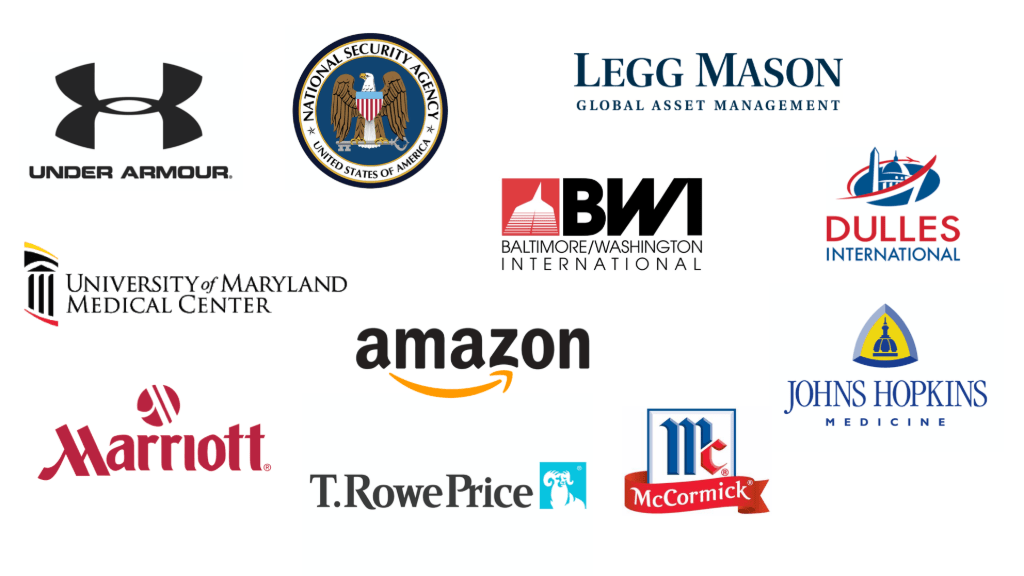