How to Plan Your Finances as a Woman

Summary: In this article, you will learn how to plan your finances as a woman, the gender wage gap and how it affects women and money, money tips for women, and investing for women. We’ll also share where to find helpful resources about money, saving, finances, planning for the future and investing strategies.

Women are economically disadvantaged compared to men across all ethnic groups in the United States.

Women also, on average, spend more time in retirement than their male colleagues, meaning they must earn more to attain the same quality of life.

It’s no secret that women make less than men. As of 2019, women make 80 cents for every dollar that men make, according to a study by the National Partnership for Women and Families. This amounts to an annual gender wage gap of over $10,000. The median annual salary for women with a full-time, year-round job in the U.S. is $41,977. In contrast, men are making a median salary of $52,146. 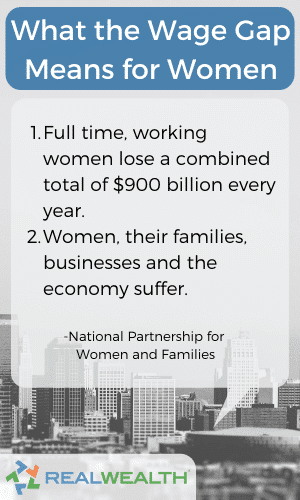 What the Wage Gap Means for Women

This wage gap is impacted by gender, racial discrimination, workplace harassment, job segregation and a lack of support for family caregiving, still most often performed by women.

According to the same study by the National Partnership for Women and Families, on average, women employed full time, lose a combined total of over $900 billion every year due to the wage gap. This massive loss in wages for women mean they have less money to support themselves, their families, and save and invest for the future. Because of this, not only do women and their families suffer, businesses and the economy do as well.

What if the Gender Wage Gap Were Eliminated?

If the annual gender wage gap were eliminated, on average a working woman would have enough money for: 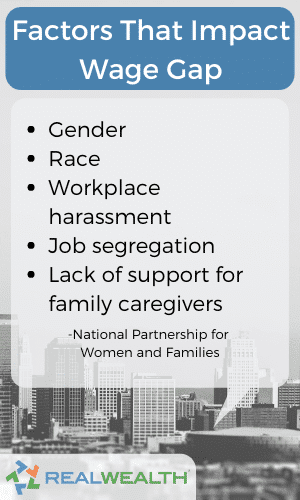 How the Wage Gap Impacts Financial Planning For Women

Now that we see how the gender wage gap affects women and their families, how does that impact financial planning for women?

Planning for retirement can be a daunting task for anyone, but the wage gap makes it especially difficult for women.

The good news is that women tend to be better investors. Fidelity reported that after reviewing over 8 million investments, women yielded higher returns on average and were better savers overall.

The theory behind why women are better investors and savers is because women in general are responsible for household operations, which requires a long-term view when planning for the future. This is especially reflected by how often men trade their investments, 55 percent more frequently than women.

How to Plan Your Finances as a Woman

Because women make less than men, it’s absolutely crucial for women to intelligently invest and financially plan for the future. Learning how to plan your finances as a woman comes with its own set of unique challenges, but with tons of resources out there.

Women tend to lack confidence when it comes to money and investing. Because of this, they tend to seek help more often than men. If you are trying to figure out the best way to plan your finances, get financial advice from an expert. They will be able to look at your unique financial situation and provide helpful insights and recommendations to reach your goals.

Maintain Your Own Financial Plan

Creating a financial plan is just part one of your journey. You need to maintain your own financial plan. Consistently check in on your finances including, spending, savings and investments. Keeping your finger on the pulse of your financial plan will promote discipline to reach your goals.

Everyone is going to make mistakes. After all, we are all human. One example of a costly mistake is withdrawing money from your retirement accounts early. While it may seem nice to have access to a good amount of money when you need it, the fees and taxes associated with taking your money out early are extremely costly. 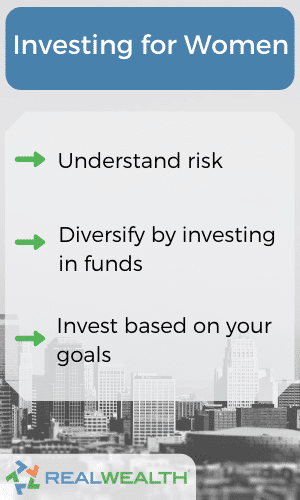 For a number of reasons, investing is still very much dominated by men. Financial knowledge tends to be lower among women as well.

Sallie Krawcheck, CEO and co-founder of Ellevest, an investing firm that targets women says, “I think, as females, we get such negative messages around money, or how it is not an area we’re supposed to have expertise in.”

Unfortunately, there are so many disadvantages women face that it is arguably more important for us to have investing knowledge and skills. Not only do women live nearly 5 years longer than men, women make less money over their lifetimes. It’s also more likely for women to leave the workforce to take care of children. Additionally, women’s salaries peak during their 40s, in contrast with men’s salaries peaking in their 50s.

Due to all of these disadvantages, women overall have less saved for retirement. According to a survey done by Student Loan Hero, women had only about half as much money saved as men, on average. Plus, only 52 percent of women reported to have a retirement account, while 71 percent of men had one.

Why Women Need to Think Differently About Investing Than Men

With women having longer lifespans than men, on average, women must take more risk with their investments. You can find thousands of traditional investing models that suggest putting 70 to 80 percent of long-term savings into stocks, 30 percent in bonds, and gradually over time changing your portfolio mix to more bonds and less stocks.

But there’s a catch, these traditional investing models work well for the average man’s lifespan and salary trajectory. Women do not generally benefit from these models built around the average male. Krawcheck explains, that women should think about keeping a larger portion of investments in the stock market for longer.

There is no established formula for women to create just the right mix of investments or the right amount of risk. Determining how much risk to take on investments depends entirely on your income, amount of money in savings, age and goals.

Bonds are considered to be less risky than stocks. With stocks, you are buying into a share of a company, so your investment depends on the success or failure of that company. Bonds are less risky because companies or the government borrow your money and agree to pay you back plus interest.

Diversify By Investing in Funds

As mentioned above, a great way to diversify your portfolio is to invest in real estate. Because real estate is a physical asset, it fluctuates with the housing market, rather than just the stock market. So if either market takes a dip, you’ll have your investments spread or diversified and lower the risk of losing everything in one or two investments.

You may also like this article from our partner website: Best Places To Buy Rental Property for Cash Flow & Appreciation

Invest Based on Your Goals

When weighing risk, you need to consider your goals. Are you saving money for a short-term goal, like buying a new car or building an emergency fund? Or is your goal long-term, like saving for retirement 30 years down the road? How much risk you should take on depends on what your goals are. You can afford to take more risk with long-term goals, like retirement, and less risk with short-term goals.

A good option for shorter-term investments are called CDs or certificate of deposit. CD’s offer higher interest rates compared to savings accounts and come with low-risk.

All people, but women especially, should save as much money as possible, as early as possible. How to plan your finances as a woman and learning how to invest like a woman is even more important because of the gender wage gap. Increase your earning potential through smart investing and set yourself up for retirement and financial freedom.

At RealWealth, we offer hundreds of learning resources about finance, ways to save money, ways to make more money, investing tips for every type of investor, and how to build real wealth through investing in real estates.

You can also listen to our podcast, The RealWealth Show, hosted by our Co-Founder and Co-CEO, Kathy Fettke. Including guest experts from around the world sharing their financial and investing experience and advice.

All of these resources are free! And as Beyoncé sang in Run the World, “We’re smart enough to make these millions/ smart enough to bear these children/ then get back to business/ …Who run the world? Girls.”

Jessica Willens
Jessica manages content creation, PPC and SEO for RealWealth. She joined our team part-time in August of 2015 and quickly moved to a full-time position to write for the blog and to oversee our independent researchers and analysts that help keep RealWealth on the cutting edge of investor education. In her free time, Jessica enjoys writing music, baking, meditating, and spending time with her friends and family. 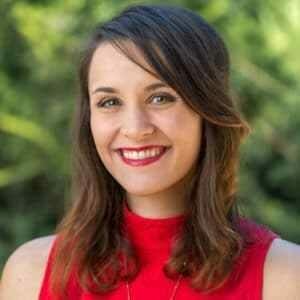 Jessica Willens
Jessica manages content creation, PPC and SEO for RealWealth. She joined our team part-time in August of 2015 and quickly moved to a full-time position to write for the blog and to oversee our independent researchers and analysts that help keep RealWealth on the cutting edge of investor education. In her free time, Jessica enjoys writing music, baking, meditating, and spending time with her friends and family.
Related Posts
Scroll to Top